Midwestern rail transit tends to evoke imagery of rusted steel and graffitied cargo cars—not exactly the picture of the speedy, sparkling passenger rail of the future. And yet railroad advocacy has hit a stride in recent years, especially with the Green New Deal’s emphasis on implementing widespread high-speed rail in the U.S. and Amtrak’s recent proposal to open five new passenger rail routes in Ohio. While it might be hard to believe today, Ohio was once the center of innovative public transit—more specifically, electric interurban rail, which had a brief but vibrant life as a transition between main-line railroads and automobiles for short-distance travel.

“The story of [the interurban’s] meteoric rise and equally sudden demise, and of the role it played in the transportation picture of its day, is a drama rarely rivaled in the economic history of the country,” writes Thomas Patton in Lake Shore Electric Railway.

Interurbans in Ohio seem to be little more than a blip in transportation history, and yet their popularity, efficiency and socioeconomic benefits remain nearly unrivaled in the state. With Ohio’s near-total reliance on private car travel and little opportunity for public, inner-city—let alone interurban—transit today, the question remains: what happened, and what’s next?

Interurbans, as their name suggests, are small trains run on electrified lines connecting major cities and small towns, and they were a popular method of transportation throughout the country in the late 19th and early 20th century. The first line in Ohio, by some accounts, was the Newark & Granville, and by 1889 the rapid expansion of the Ohio interurban system had begun—replacing the canal system as the preferred transportation method for the region as investment in railroads through the Ohio Loan Law helped push canals out and railroads in. The state was covered in 2,798 miles of track, the most of any state by around 1,000 miles. Practically every town with a population of 5,000 or more was reachable by the system, which included nearly 100 individual lines run by a handful of major companies.

“The Midwest, particularly Ohio, Indiana, Illinois, Wisconsin and Michigan, probably had more interurbans than any other part of the country. They said that they had the most complete network of interurban lines. They radiated out of the larger cities like Columbus, Dayton, Cincinnati, Cleveland, Toledo, Lima,” Alex Campbell, who runs rail history website columbusrailroads.com, said.

Ohio’s flat terrain and combination of densely populated cities and smaller agricultural communities made it the perfect candidate to become the interurban center of America, and electric rail’s speed and inexpensiveness when compared with steam rail made it an attractive option for Ohioans. Cities like Toledo were also quite prosperous at the time, due to the trade access and employment opportunities offered by the railroad industry.

“Ohio really had the right geography, in terms of the physicality. Certainly in the Great Black Swamp area, it’s pretty easy to develop an interurban or steam railroad, for that matter. But also, it had a great population, it was diverse and it was generally prosperous,” Dr. Roger Grant, railway historian and author of Electric Interurbans and the American People, said.

Lake Shore Electric, on the other hand, has the distinction of being the last running interurban railway in the state. The route ran from Cleveland to Toledo, and the tracks ran on both private rights-of-way and city streets, sharing tracks with streetcars. Its last train (the last interurban to run in Ohio) ran from Park Square to Toledo in 1938. Both of these lines are prime examples of what could’ve been for interurban travel in Ohio, had it stuck around. Despite the short tenure of this bygone type of rail travel, though, the social and economic benefits were clear to Ohioans at the time. Another advantage of interurban lines was their speed and efficiency; interurban service in the early 20th century was making freight deliveries at around the same speed as early 21st-century FedEx deliveries.

The interurban system’s impact reached beyond travel to improve the Ohio landscape in cultural and economic ways, as well. As documented in a 1906 issue of the Journal of Political Economy, Ohio interurbans allowed rural populations easier and cheaper access to cities, which in turn meant improved access to urban social life and better schools. Rural workers, like farmers and merchants, also gained better access to transportation for themselves, their laborers and their merchandise. Although most major environmental movements were decades away, the 1906 piece mentions the improvement of air quality thanks to the preference of electric interurbans over steam rail in most areas. Finally, interurban railroads had a positive effect on the real estate market wherever they went; homes along the tracks increased greatly in value. The cultural impact of the interurban was undeniable, to the point where everybody wanted in on the trend. The one major city that didn’t have it even resorted to trickery to convince outsiders they did.

“In Ohio, every city above 5,000 population had an interurban except for Coshocton, and the people in Coshocton were embarrassed. There were various efforts to build a railroad and electric interurban into or through Coshocton. And so what did they do? They never got it. But they got involved with postcard fakery. We have picture postcards showing an interurban on the main street of Coshocton,” Grant said.

Until today, people remain enchanted by the memory of the interurban lines, and forums and Facebook groups abound with old photographs, maps and secondhand memories.

So what happened, and why don’t we have interurbans running across Northern Ohio today? The short answer is the car—and the automobile industry that would take its foothold in the Great Lakes region.

“The clientele for the interurban rail was everybody in the community, because it was, in some cases, the only way to get to the bigger cities around them. And certainly the most convenient. And in the early days, I would say that everybody would be open to that,” Campbell said. “[But] when you could buy a Model T, there was just no sense to ride an interurban—you just get in your car and go where you want it to go.”

Much like the canal system before it, Ohio’s interurban network fell from grace after being replaced by ostensibly superior technology. The automobile was not terribly popular initially, being relatively impractical because of its cost and fragility. The advent of the Model T made cars cheaper, however, and the introduction of paved roads made automobile fragility much less of a deal breaker. The death knell of the interurban industry came along with these changes, and, although some of the companies continued as electric providers, the final train ran in 1938. The tragic history of this seemingly outdated system, however, could be a guide forward for Ohio’s public transit, under the right circumstances.

“I don’t think there is another industry in the United States that ever was so- created so much optimism. You know, it’s the transportation wave of the future,” Grant said.

Although it isn’t the most prominent political issue, discussions about passenger rail expansion in Ohio have been ongoing for years. In addition to the recent Amtrak proposal to create five new Ohio corridors, the Midwest Regional Rail Initiative, Midwest High Speed Rail Association Proposal and SNCF Midwest Proposal have all offered ideas for the future of passenger rail in the Buckeye State but have yet to come to fruition.

With the potential for future Amtrak service in the state, perhaps something akin to the interurban heyday could come about again. While interurbans are not the same as Amtrak, as the former is electric rail with lower capacity and the latter is high-capacity rail with trains that run on diesel and electricity, what both of them offer is a potential for a future where Ohio is easily navigable for both public and private transit, on both roadways and railroad tracks. The Amtrak proposal includes a corridor that runs passenger rail service between Cleveland and Toledo on a similar route to the Lake Shore Electric’s.

Even if the Amtrak proposal does not come to fruition, perhaps a new passenger rail option incorporating a modern interurban system could utilize this route to its fullest potential and spark a new era for Ohio transit. Either way, new infrastructure will need to be installed, which is a cost that makes many anxious.

“One of the talked-about corridors—Cleveland, Columbus, Dayton and Cincinnati—has been talked about for 50 years now. And there is no rail infrastructure in Columbus or Dayton. The stations that Amtrak once used—they’re gone. You would have to create service facilities at both ends of the line, in Cleveland and Cincinnati. Those don’t exist. And all this would take a lot of money and time to develop,” Craig Sanders, author of Amtrak in the Heartland, said. “There’s a lot of people who simply do not believe that railroads are a well suited mode of transportation in this country, and they are more supportive of airlines and the private automobiles.”

Even with this infrastructure in place, though, there’s still the issue of service and operating costs. Perhaps the biggest challenge of rebuilding passenger rail in Ohio is that these new trains have to run, and run often—otherwise nobody will use the service. While infrastructure is important, people need to have access to service and be aware that said service is available before any kind of passenger rail can hope to revolutionize travel like trolleys in San Francisco and New Orleans or high-speed rail across Europe and Japan have.

“Run more trains—faster trains and more timely trains. Then it becomes more visible. The history has been that once you establish a good service like that, the public not only doesn’t want to let go of it, they want to have more, they want to have better,” Stu Nicholson, executive director of All Aboard Ohio, said.

Looking forward, one of the lessons that Ohio’s transportation history has taught us is that technological advancement is not always about replacing one technology with another. While the history of transportation has seen rail replacing canals and highways replacing rail, there are benefits to rail that highways don’t offer. In reality, the ideal is more than likely a combination of passenger rail with private cars and public buses, providing more abundant and convenient options for regional travel. While Ohio’s interurban boom is long gone and doesn’t look like it will be revived anytime soon, buzz around Midwestern rail transit means we may one day soon be able to take a snooze on a commute into Cleveland or hop on a train for a weekend trip to Cincinnati. 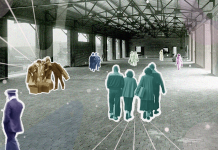 Ohio’s Transit System and the Path to an Intermodal Future

Wrestling With the Status Quo: A Review of The Peanut Butter...

Ohio Rep. Marcy Kaptur Has a New Committee Position. What Could...

No Place Like Nome: New Life for an Abandoned North Dakota...

The Attraction of Food Service Work Is Plummeting. And Delivery Robots...

“The luxury of hindsight” | Anne Sokolsky

Midstory is a 501(c)(3) non-profit thinkhub that progresses the narrative of the Midwest by incubating bright, diverse and interdisciplinary thinkers to exchange ideas and envision the future of our region through multimedia storytelling and solutions-oriented research.