In episode 3 of Weight of Sound, Toledo Symphony Orchestra Principal Horn Megan Amos shares her inspiration of learning from colleagues and her experience as one of the youngest orchestra members.

It’s really nice. It’s awesome hours. All the colleagues and I get out of our cars and we’re like walking in and everyone’s like, “How are you”, and I’m always like, “It beats working for a living playing music with each other for a couple of hours a day.” And then, you know, going home and practicing.

Mahler Five, that was a really big moment for me. And actually, that was one of my first official weeks here as principal horn. So it was kind of nice to come in and everyone could hear what I sounded like. It was kind of a turning point. I felt like a newbie before that. And then I felt like I really fit in after it.

I grew up listening to the Boston Symphony play every week. We would go every week, sometimes multiple times a week, and I would always really pay attention to how they approach that. And so, I think some of that approach is how I go about it. But in terms of understanding it, I don’t mean to sound like a nerd, I do watch the conductor a lot. My husband says I’m kind of weird because I watch the conductor more than other people. Just how the conductor will lead other instruments – maybe when I have that same line later on, just pick certain things up over time. Just knowing my part well enough that I can not really have to focus on it. I can focus on other stuff going on around me, and I think that’s something that’s been hard during this quarantine, is not being able to play with other people as much because I really just enjoy hearing people, and like, I’ll hear them. And I’m like, “Oh, I could do that musical idea, too. Kind of an inspiration.”

I really like that everyone is in a different part of their life and just like outside of playing together. It just makes for like a cool mixture that, you know, I can be 25 and be friends with a colleague, that’s like in his late 60s and we’re very close. I took the approach of [finding] the person in the orchestra that has been there a long time. Maybe not the longest, but a long time and the happiest and be friends with that person. And it’s been cool doing that. It’s been nice to find those kinds of people no matter how old they are and have connections with them.

Featured excerpt of live performance from: 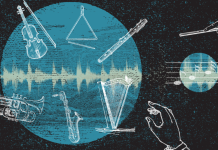