The Mills Race: A Historic Test of Seamanship on Lake Erie

The Mills Race is a historic regatta on Lake Erie that attracts sailors from across the Great Lakes and beyond to the Toledo Yacht Club. Its success as an event points to a larger discussion about how Toledoans can capitalize on the geographic asset of Lake Erie. Cordelia Van der Veer was a participant in Midstory's 2020 High School ThinkLab program. Cover graphic by Jessie Walton for Midstory. 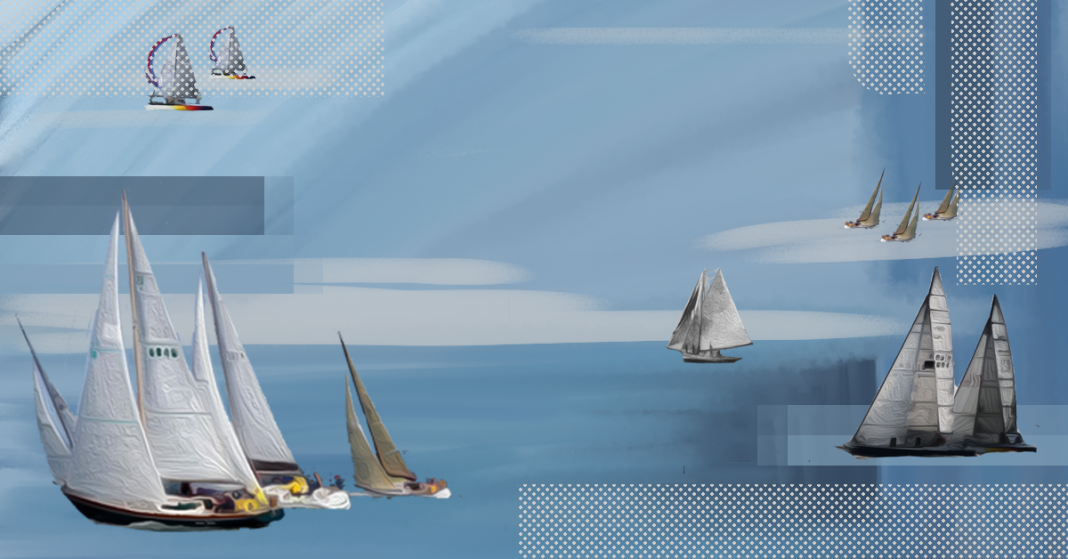 Friday, August 9, 1907 was a fair-weather day on the western end of Lake Erie. Boaters from Cleveland, Detroit and Toledo flocked to the Toledo Yacht Club to participate in racing events that would test their seamanship, grit and endurance. Excitement was in the air as Toldeoans read about the activities in the morning edition of The Blade.

Of the events, the 191-mile sailing course around the Detroit River and Cleveland Crib Lights was the most challenging. Yachts registered for this course were up to 76 feet long and required as many 12 crewmembers to race. The first to finish from this fleet would receive the recently commissioned Mills Trophy.

At the sound of the starting gun, the yachts competing for the Mills Trophy started their pursuit. Unbeknownst to the sailors, the start of the race would initiate a 113-year tradition known as the Mills Race—an event that would draw national attention to the humble city of Toledo for years to come.

The Origins of the Mills Race

As a city founded on its proximity to the Great Lakes, it comes as no surprise that Toledo has a rich history of boating. In 1865, when Toledo had only 30,000 residents, two rowing clubs merged to form the Toledo Yacht Club (TYC), now one of the oldest yacht clubs in the United States.

Throughout the late 19th and early 20th centuries, the TYC built a reputation as a significant sailing club by hosting various regattas. To accommodate growing membership, the TYC commissioned a state-of-the-art colonial clubhouse completed in 1903, only to be destroyed by a devastating fire three years later.

In support of the TYC after the fire, Commodore Merrill B. Mills donated a sterling silver punch bowl with ladle and cups. As stated in the Deed of Gift, Mills gifted the trophy “for the purpose of encouraging proficiency in the art of navigation upon the Great Lakes by means of popular contests in yachting.”

The first Mills Race was an extremely well-received event. Even as early as 1907, the press was comparing the Mills Race to regattas on the east coast.

Walter F. Beiling commented to The Blade in 1907, “I have attended nearly all the big long distance races given on the lakes for years, and the boats brought together by the Toledo races compare more favorably with the ocean going yachts of the east than any I have elsewhere seen on the lakes.”

Shortly after the first Mills Race, S.O. Richardson, the President of Libbey Glass and Commodore of Toledo Yacht Club, wanted to give smaller crafts an opportunity to race. Richardson asked President William H. Taft to commission a new trophy for a class of 15 ft. catboats. As an Ohio native and sailing enthusiast, President Taft was glad to support the Mills Race, and in 1909, the President’s Trophy was first awarded to a yacht called Possum.

The Mills Race in the 21st Century

Today, the race remains a celebrated tradition. In the 2019 Mills Race, 103 yachts ranging from 26 to 68 feet in length competed in one of three courses: the Mills Trophy Course (78 miles), Governor’s Trophy Course (60.5 miles) or President’s Trophy Course (26 miles). Each course started 1.5 miles from Toledo Harbor Light and sailors raced through the night to finish in front of Put-in-Bay. Although the courses and boats have changed over the years, both the Mills Trophy and President’s Cup are highly sought after amongst Great Lakes sailors.

“When you’re a junior sailor, you walk into a yacht club, and you see those silver cups and [you think], ‘Someday I want my name on that,’” Commodore Duane Burgoyne, a local sailor who has raced in 32 Mills Races, said.

Another sailor, Dennis ‘Skip’ Dieball started off as junior sailor admiring the large silver cups. Since then, the Toledo native has become an international name in sailing—winning the 2015 Etchells World Championships, competing in the 2019 Pan American Games and starting his own sail-making business, Dieball Sails.

According to Dieball, the Mills Race has maintained its popularity in part because of the unique geography of the Western Lake Erie Basin. The shallowness of the water means weather is unpredictable, a challenge for sailors. Additionally, the western basin offers several islands easily accessible by sailboat.

As a business owner in addition to a sailor, Dieball also points to the economic impact of the Mills Race as a major benefit.

“The fact that [Toledo has] the Mills Race…for my business was a big deal because it offered a simple [incentive] to deliver a product,” Dieball said.

Sail-making businesses are not the only beneficiaries of the Mills Race. With up to 100 yachts competing in the event, thousands of sailors and supporters need lodging, food and other services in the Toledo and Put-in-Bay areas each year. As of data from the early 2000s, the Mills Race attracts an estimated 3,000 people each year to Toledo for the festivities.

To politicians and journalists around the country, Lake Erie is known more often for its environmental crises; national news sources report on the “slug of toxins” that plague the body of the water every year. While water quality should absolutely remain at the forefront of national conversations, it does not have to be the only defining identifier of Lake Erie.

If Toledo and the western basin can serve as the location for historic events like the Mills Race, what other events can the region foster? How else can the citizens of Toledo capitalize on the geographic asset of Lake Erie?

For many, Lake Erie is not just a source of competition or economic opportunity. Lake Erie is a recreational, cultural and economic asset to the region, and its potential for national and even international attention doesn’t stop with the Mills Race. It is the center of a larger community.

Perhaps Skip Dieball put it best while on a sailing trip on Lake Erie with his family: “‘Where else would we rather be right now than doing this?’”

The High School ThinkLab is a youth program dedicated to cultivating young people toward contributing meaningfully to our region through research, thought, creativity & storytelling. Learn more about the program here and read other participants’ stories here.

Re-envisioning East Toledo | 2. “Once an East Sider…Always an East...