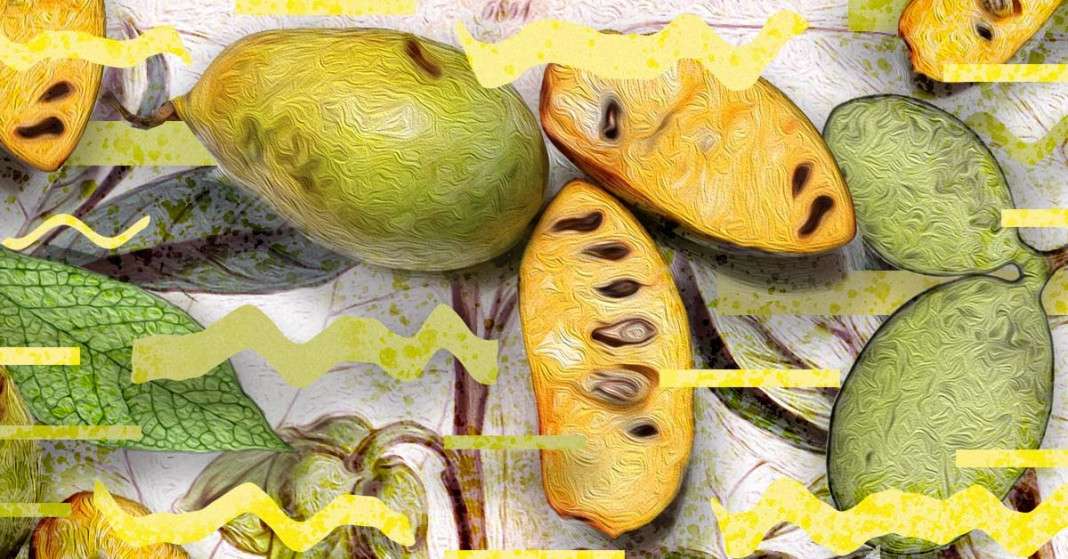 The pawpaw looks unremarkable from the outside. Its oblong and slightly misshapen body encapsulated in a tough, greenish-yellow skin brings to mind a less-than-appetizing, severely underripe mango. But crack it open, and you’ll be greeted with a fragrant aroma that accompanies a distinctively linear pattern of seeds ensconced in a pale yellow, creamy interior that looks like it’s straight from the tropics. Fortunately, you don’t have to travel the world to taste it; you can find it abundantly in the hills of southern Ohio and across the U.S. — as of 2009, it’s even been named Ohio’s state native fruit.

The fruit is known to have been around for 30,000 years, according to Donald A. Karas, program administrator for the Ohio Department of Natural Resources Division of Forestry. Belonging to a family of tropical fruits, fittingly known as “custard apples,” parts of Asia, Central and South America are well acquainted with its flavor. But this little-known, well-kept secret has grown native to the temperate, deciduous forest of North America and been savored for centuries (no, really — ancient mastodons munched on pawpaws as they roamed the continent and spread the fruit’s seeds in passing).

Explorers observed Native Americans gathering and bartering pawpaws in the Midwest as early as 10,000 years ago, as they were a hot commodity in the trade market, Karas explained. The fruit’s seeds were used as beads, which increased their appeal in the barter system. Apparently even our founding fathers had a fondness for the fruit; George Washington planted the tree at Mt. Vernon and Thomas Jefferson likewise at his Monticello estate.

“In Appalachia — whether it by Native Americans, or by the explorers, by the settlers, and by the people that live there — it’s just always been a popular common fruit,” Karas said.

According to Karas, the pawpaw’s flavor is best described as “a cross between a banana and a mango.” But, he said, “if you really focus on it, when you eat it, you probably taste like five different fruits in the one. It’s got an unusual flavor.” It’s eaten much like a mango, most easily consumed by cutting it in half and eating the fruit right out of its skin — although the skin, along with the seeds, contain toxins and shouldn’t be eaten.

Unlike the fruit, however, the pawpaw’s flower is unappealing at best — its brownish-purple color is surpassed in distastefulness only by its smell; Karas compares it to the stench of rotting meat. While this aroma is certainly not appealing to humans, it’s an alluring scent for blowflies and carrion beetles.

Believe it or not, these usually unwelcome critters are necessary for the fruit to propagate (although “the blowflies and the beetles” doesn’t have as nice of a ring as “the birds and the bees”). The pawpaw is genetically complex and evolved prior to the pollination of flowers by bees; it is self-incompatible, meaning that it does not independently cross-pollinate and cannot pollinate itself. Instead, the plant grows like a clone as the roots spread out and new, genetically identical shoots come up. As a result, pawpaw trees need to be near another grafted, genetically distinct variety of the pawpaw so that insects can help the trees to cross-pollinate and bear fruit.

Despite their complexity, pawpaws are a resilient fruit. Because their roots can tolerate more anaerobic conditions than others, their trees survive in saturated soils in which other plants would not be able to survive. They are technically an understory species, but Karas noted that they develop best out in the open. The ideal environment for the pawpaw is in a forest opening where they can be protected but also have access to sunlight.

Highland County, Pike County, Fayette County and Fairfield County are the areas in which Karas has noticed an abundance of pawpaw trees, but you can find them all across Ohio and as far south as Florida.

“I’ve picked them in almost every county in the state,” he said.

Aside from its unique botanical properties, the pawpaw has become a cultural phenomenon in the otherwise overlooked region of southern Ohio. Everyone wants to be known for something, and southern Ohioans are all about pawpaw promotion and pride. Pawpaw admiration includes but is not limited to giant pawpaw costumes, pawpaw festivals and pawpaw ice cream.

Ohioans’ love for the pawpaw doesn’t stop there. Chris Chmiel, owner of Integration Acres farm in Albany, Ohio, started the Ohio Pawpaw Festival in 1999 and the Ohio chapter of the North American Pawpaw Grower’s Association in 2000.

“The vision of basically making Ohio the leader of the pawpaw world was sort of my goal,” he said.

Pawpaw culture is not limited to Ohio —from Pennsylvania to Kansas to New Jersey, there are many communities that feel a historical connection to the pawpaw and honor it as a special relic of indigenous culture and roots — but Chmiel wanted to make the relationship official.

Chmiel advocated for the pawpaw to become the state fruit alongside Jimmy Stewart, a member of the Ohio House of Representatives and then the Ohio Senate from 2003 to 2011.

“I went up to the statehouse and testified and took different pawpaw dishes up there and passed them around to the committee, and we had a little bit of a lobbying effort where we had people call their state reps and their senators,” Chmiel said.

At the same time, others had proposed the tomato as the state fruit due to the popular tomato festival in Reynoldsburg, OH, which is also home to the state Department of Agriculture. The pawpaw-tomato rivalry was short lived, as Ohio ultimately chose the tomato as its state fruit in 2009. Ohio didn’t forget the pawpaw, however, and named it the state native fruit the same year.

Chmiel feels that having it as the state native fruit is a “big deal,” as it led to great traction for the pawpaw industry and its overall popularity across the country.

Since 1999, Chmiel has held an annual pawpaw festival as a way for him to get the word out regarding his home-grown fruit. The first year that the festival took place, there were 400 people in attendance and it was a short event on a Sunday. In 2019, 10,000 people came to the three-day event. The festival has also been featured nationally in The Washington Post and Better Homes & Gardens.

Through his love for sharing the pawpaw, Chmiel’s festival acts as a platform for the local economy to thrive. Attendees can purchase a variety of pawpaw dishes and products — including a popular pawpaw beer — learn about pawpaw history and enjoy live music. There are pawpaw competitions and cook-offs galore, and writers and food judges come from around the country to partake in the festivities.

“We really try to have an event where people are happy and have a good time,” Chmiel said.

Festivities aside, the pawpaw has become Ohio’s pride and joy; it is a genetic wonder, an indigenous artifact and a modern attraction that brings thousands of spectators to the Buckeye State each year. What was once a little known, seemingly exotic fruit has now become a household name and perhaps one day will populate farmers markets across the nation — complete with a “Product of Ohio” sticker on its deceivingly unremarkable exterior.