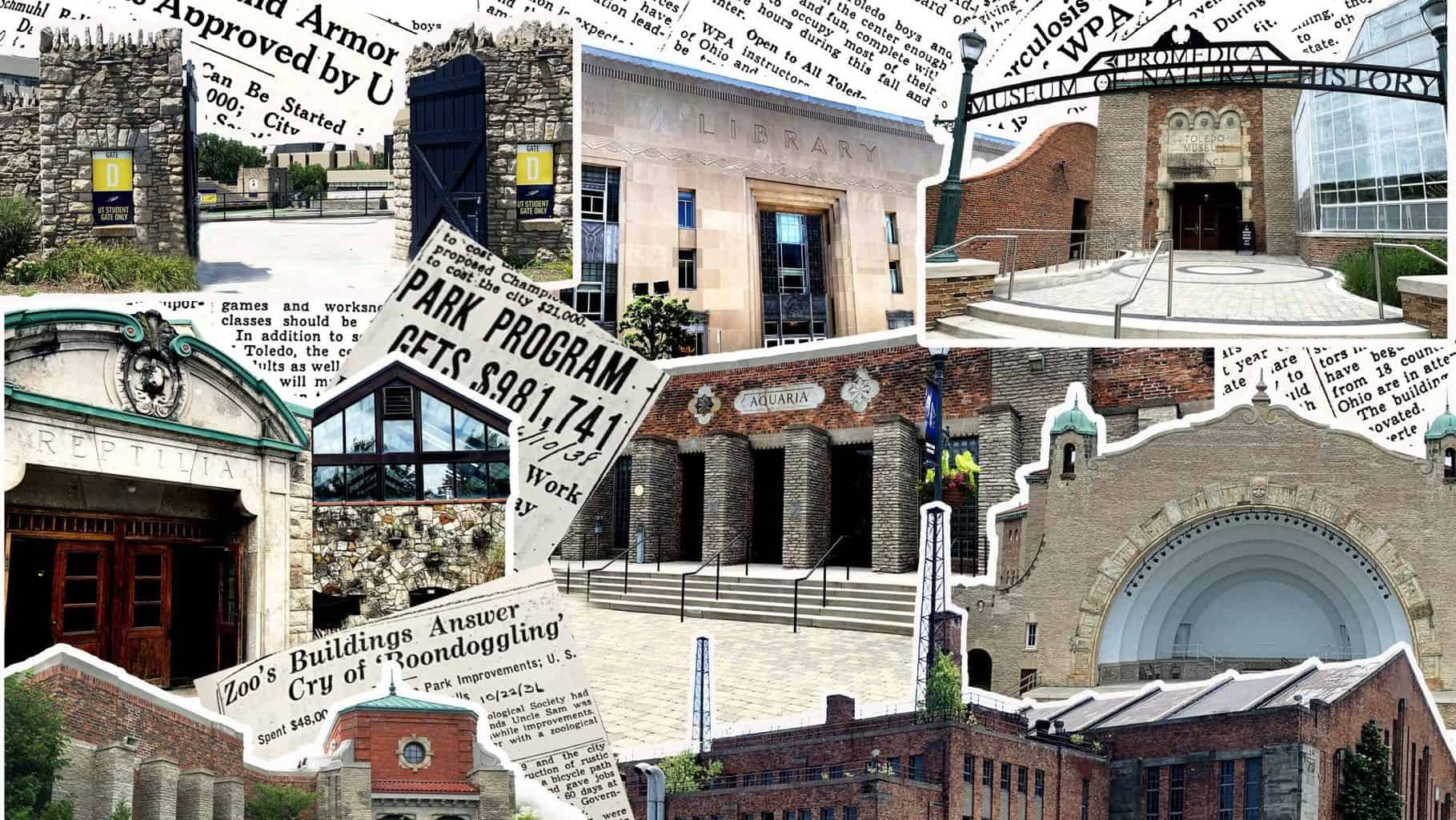 Hope and opportunity prevailed in the 1920s Toledo, Ohio as the “future great city of the world” led the nation in manufacturing job growth. Just over 10 years later in the summer of 1931, Toledo suffered the worst banking crash of the Great Depression, closing four of its largest commercial banks. Soon afterward, a greater percentage of the people in Toledo survived on federal relief than in any other American city and 80% of Toledo’s industrial workers were unemployed. The Works Progress Administration (WPA), created during President Franklin D. Roosevelt’s administration, helped the people of Toledo get work—and its mark on Toledo can still be seen all over the city. Buildings commissioned under the WPA still house some integral Toledo institutions, and many have been renovated for reuse, continually reviving the hope these buildings symbolized in our not-so-distant past.

Echoes of the past can be heard at Glass Bowl Stadium at the University of Toledo.  It was originally built in 1936 by the WPA and has been renovated numerous times since then. The stadium was ranked fourth out of all college football stadiums in the United States in 2018 by Podium.com. One of the reasons the stadium was ranked high is because the stadium is intertwined with parts built by the WPA and more modern amenities. The Glass Bowl Stadium brought work to the people in the 1930s and now the stadium has given and will continue to give entertainment to the people of Toledo for years to come.

Applauded as one of the best zoos in the U.S. by USA Today, the Toledo Zoo is set apart from others because of the unique style and sense of community that has made the people of Toledo love the buildings. The Reptile House, the Aquarium, the Museum of Science and the Amphitheatre are all unique structures, created from materials salvaged from old and unused buildings. The WPA used materials from structures like the Mulburn Wagon Works from the Toledo Edison Company, the House of Refuge in Walbridge Park, Temple Theatre and the abandoned Miami and Erie Canal to construct the iconic buildings that form our zoo. The Aviary at the Zoo was also the first building in the world to use glass blocks.

Revitalized in a way that mixes the old and the new, the Main Toledo-Lucas County Public Library is located in downtown Toledo and was opened in 1940. The library was renovated in 2001 to bring it more up-to-date and is currently being renovated again to modernize it further. While they are renovating the library to renew its look, the city is still preserving aspects that were originally designed and built through the WPA, such as the outward facade. The construction of the library and the many subsequent renovations have created jobs for Toledoans throughout history, and the building remains an integral public resource for downtown and beyond. The main library provides local history information, educational resources, job search assistance and more for local residents.

The Bay View Naval Armory is one of the only WPA buildings that is currently abandoned in Toledo. The armory was built in 1936 for the Navy to use for training, but the Navy officially moved out of the building in 1988. In 1997, the city of Toledo purchased the building, and it sat empty until 2004 when developer Roger Homrich bought the building. The building remains abandoned to this day. How could we use, renovate or retrofit this historic building for use today?

The heart and hope of Toledo is centered around WPA buildings, the people who built them and the people who still use them. The Toledo Zoo, the Main Library and the Glass Bowl Stadium are just a few of the main community hubs of Toledo. All of these buildings have been renovated and adapted to fit the purpose of the time, but their history remains etched into the bricks and memory of Toledo, memorializing our past while serving our future.