The Conundrum & Commitment of Classical Music Organizations Amid COVID-19

Classical music organizations are struggling due to the COVID-19 pandemic, but local organizations have assessed their constraints and aim to persevere through innovation. Cover graphic by Marley Jacobson for Midstory. 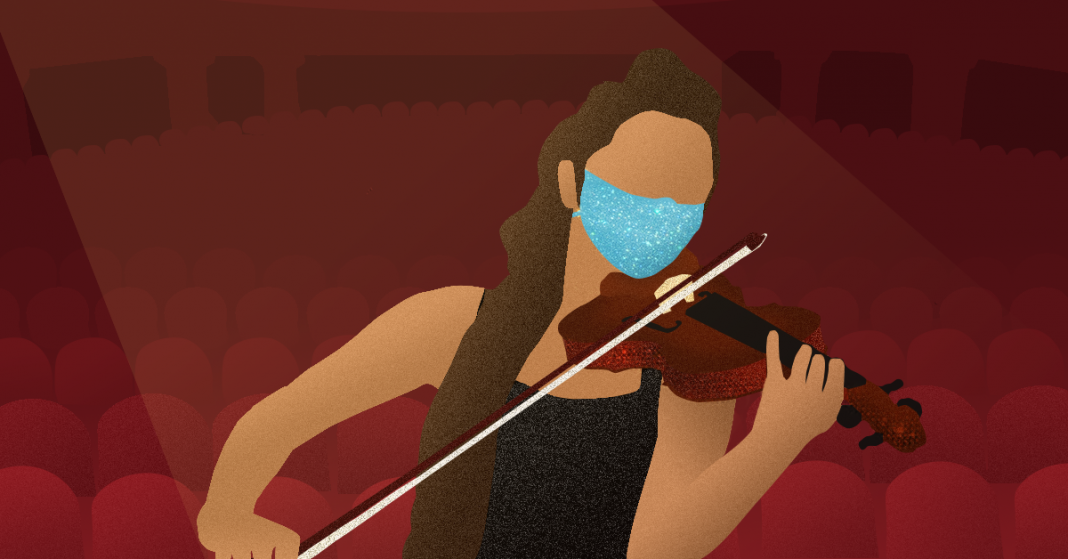 The classical music world—symphonies, operas, ballets and more—has long struggled to adapt to changing times, to appeal to younger audiences and to innovate in the digital age. COVID-19 (and its accompanying bans on large gatherings) seems like it would deal the final blow on an already-dire situation. But as some of the most prominent classical music organizations remain closed until 2021, the industry is also finding ways to innovate—safely.

Weathering the Pandemic at a Local Level

On a local scale, the pandemic has hit hard. Regional performing arts organizations ordinarily rely on relatively small pools of donors to cover budget shortfalls, but with the economic recession caused by the pandemic, funding is more limited than ever. The virus has also left local theaters vacant, and without revenue from ticket sales, many organizations are struggling.

“I think it is going to be very difficult for arts groups to weather this storm,” James Norman, the Director of Artistic Administration and Production at the Toledo Opera, said.

Some regional organizations, however, remain hopeful and are brainstorming ways to innovate. Zak Vassar, the President and CEO of the Toledo Alliance for the Performing Arts (TAPA), plans to partially reopen the Toledo Symphony and Toledo Ballet in the fall.

According to Vassar, many large arts organizations are shutting down because a variance in their enormous budgets places them at risk of having to halt operations. Vassar believes that TAPA’s ability to reopen in the fall is actually largely due to its smaller size.

“We’ve rethought our repertoire and revisited our choreography so that we will be able to do performances that are safe for our musicians and for our dancers,” Vassar said.

With smaller-scale productions and lowered audience capacity, both the performers and the audience will be socially distanced. TAPA plans to livestream concerts while simultaneously allowing some attendees into the venues.

The Toledo Symphony’s plan to reopen is somewhat unique compared to elsewhere in Ohio; both the Cleveland Orchestra and the Dayton Performing Arts Alliance have canceled upcoming performances while offering streaming services. The Cincinnati Opera is exploring new ways of performing online, such as “apartment arias,” where singers film themselves performing at home. These organizations also all emphasize the importance of donations, explaining that loss of ticket revenue is detrimental to their organizations.

While the Symphony and Ballet can hold smaller-scale performances, the Toledo Opera is defined by its large, dramatic presentations, the interactions of its performers and, of course, the singing. The opera has cancelled its fall 2020 season with plans to produce some virtual content instead. It also intends to livestream its Opera Gala in October. The company, however, is uncertain whether it can support even a minimal in-person audience anytime soon.

“I don’t think the majority of people are willing to sit next to each other in a crowded theater,” Norman said. He speculates that even as venues learn proper safety protocol, the Opera is still months away from live performances.

An opera is particularly difficult to produce during the pandemic because singing may increase the spread of COVID-19. Performers inhale and exhale deeply when they sing, augmenting contact with aerosol particles. The American Federation of Musicians recently released guidelines recommending that singers keep at least twelve feet apart from each other.

“That really hinders any dramatic presentation,” Norman said. “Opera is about love and hate and war, and it’s really hard to have a love duet if you are twelve feet apart.”

For both love duets and the Toledo Opera, the virus will remain a hindrance until scientists find a vaccine or the number of cases decreases enough for the virus to be less of a risk.

Within any city, the survival of regional performing arts groups is important for the local community’s cultural and social growth. Both the Toledo Opera and TAPA engage in educational outreach, particularly with young audiences.

Through the Opera on Wheels flagship program, the Toledo Opera performs for nearby schools, reaching about 22,000 students per year. The Opera also runs a pre-K program called Opera is a Story—teaching children storytelling through opera—and a student night which allows students to see the final dress rehearsal of an opera at a discounted rate. Under TAPA, the Toledo Ballet runs a ballet school, and the Toledo Symphony has a school of music and three youth orchestras. Both organizations are looking for ways to continue outreach in safe ways.

“If you think about the community engagement, we are literally educating the next generation of arts fans from within our organization,” Vassar said.

In addition to their community outreach, Toledo’s classical music organizations are vital contributors to the local economy.

“I oversee about 140 employees across the two organizations,” Vassar said. “Our economic impact is a multiplier of what it costs to run the organization.”

The Toledo Opera hires Toledo singers for a chorus, the Toledo Symphony for the pit orchestra and IATSE stage union members to work at the Valentine Theater. Before and after performances, audience members visit restaurants, bars and nearby businesses, so classical music “really is a big part of the financial makeup of the city,” Norman said.

Beyond the Logistics: Defining “Essential”

While providing access to classical music is currently a logistical challenge, Vassar believes that the virus is creating a higher demand in the local community for performing arts.

“People need the arts and people need music as a calm escape,” Vassar said. “I think that we are about to see a huge cultural awakening and a great thirst for content to satisfy the parts of ourselves that want to explore different perspectives and that want to feel in different ways.”

Historically, in times of crisis, we have looked to music as therapy and relief from trauma. We have used it as a tool for expression and understanding. As such, music is not just a financial commodity or the work of a charitable nonprofit; it adds an indispensable cultural value to society.

Yet music provides more than just relief from trauma. Through music, we learn about ourselves. Every musical performance is imbued with universal themes of humanity and links us to people who lived generations ago. The experience of going to a classical music concert presents a rare moment of community not only with those who lived before us, but also with those who currently live among us, particularly special in the quieter towns of the Midwest.

The COVID-19 pandemic has accelerated the necessity for classical music organizations to innovate. Finding a way to keep performing while balancing public safety is hopefully more than a means to survive; it is an opportunity to encourage innovation so far unseen in an already-struggling industry. Certainly, the organizations themselves must be willing to adapt. And, as recipients of the cultural benefits these organizations provide, the community’s support is as important as ever.

As we look toward the future, we long for the time that the cough of an audience member is a mere annoyance rather than a legitimate cause of concern. For now, we settle for grandiose ballads shrunk to fit our computer screens and love duets separated by twelve feet, all in the spirit of finding a sustainable path forward—hopefully, for good.

Facebook
Twitter
Pinterest
Linkedin
Email
Previous articleThe Unsung Poetry of Working-class Women: A Review of The Daughters of Erietown
Next articleAfter Industry: The Decades-long Recovery of the Glass City