Over 150 years ago, a mere 26 years after the the city of Toledo was founded in 1833, settlers began to drain the Great Black Swamp, creating some of the most farmable land in the United States and securing Ohio’s identity as an agricultural powerhouse. Quite literally underneath the profitable corn fields and prosperous farms, however, lies a perpetual battle with nature that continues to this day; drainage tiles underground prevent the swamp from returning, and ditches alongside the fields drain water from the land. Building our agricultural identity meant—and means—fighting our environmental one. Swamp is our truth, and corn is our construction. But can the two be reconciled?

This project starts from a piece of land to the east of two small towns in Northwest Ohio: Milton Center and Custar. Bordered by Mermill Road, Defiance Pike to the north and south and Range Line Road and Otsego Pike to the east and west, this 640-acre section is a result of the ubiquitous farm grid—shown in hatches—drawn over a noncompliant, swampy land—the expanding blue mass. 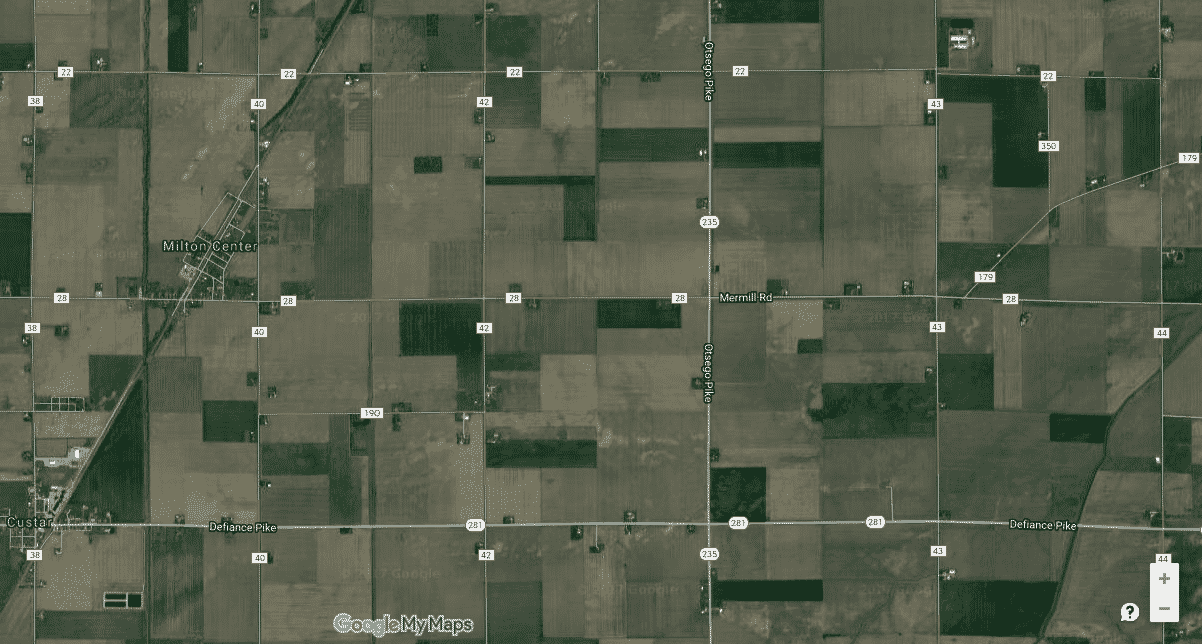 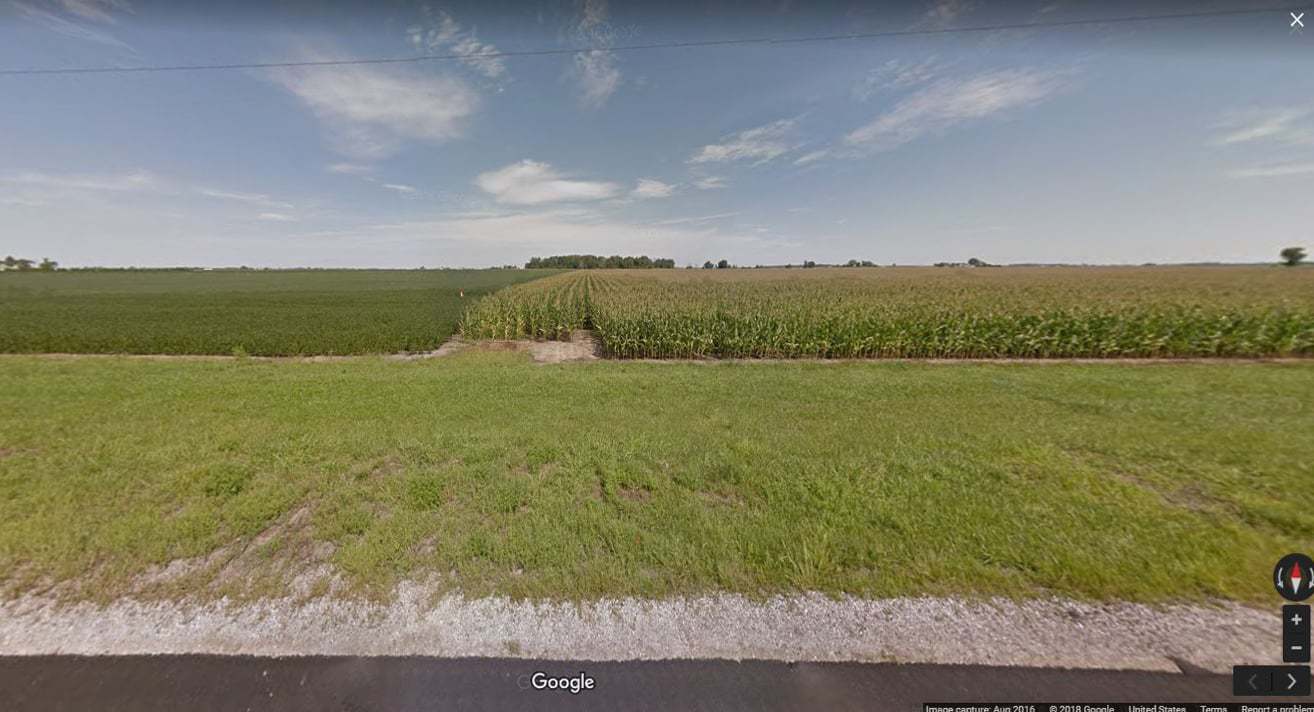 As with all farmlands in this area, two main ditches, shown by two flanking blue lines, ensure that drained water funnels swiftly and efficiently off the fertile soil. At the center, a scruffy patch reveals a forested pond—perhaps the stubborn remainder of swamp that refuses to acquiesce to the demand of dry cropland. 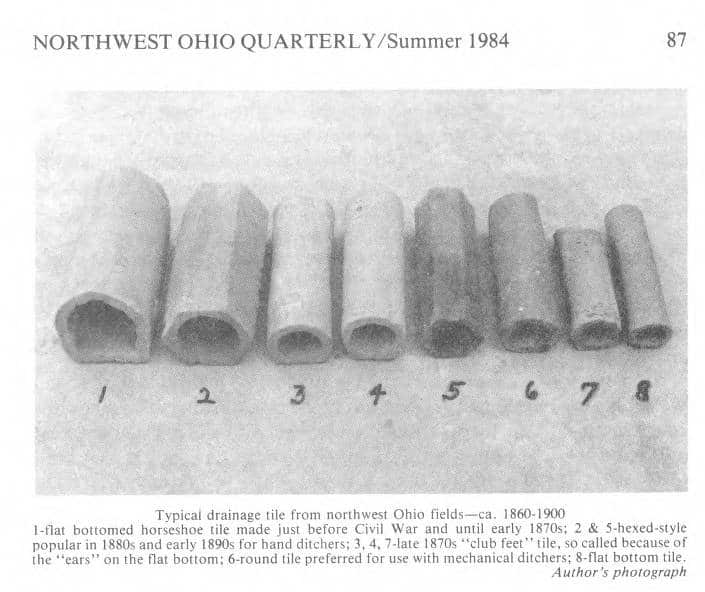 And this stubbornness is nothing new: Toledo was born out of confliction–a battle fought by fierce settlers determined to create a living for themselves. As recorded in “Toledo, City of Opportunity,” a pamphlet published for the Merchants and Manufacturers Association of Toledo in 1921, “The present business district was a dismal swamp where frogs croaked a lonesome chorus. Brave was the vision which saw here the possibility of a city, beautiful and big and friendly. Toledo takes its character from its founders . . . Theirs was the courage to found homes in forest clearings while wolves snapped at their doors. Men of vision and determination who, against forbidding obstacles, deliberately planned and built a city…”

Our battle with nature—our battle to maintain Ohio’s agricultural identity—continues on underneath our feet, allowing for human existence and prosperity. As the first Northwestern Ohio settlers quickly found out, the Great Black Swamp was not, at first encounter, compatible with a stable, agrarian human existence, let alone a prospering region and state. But what would happen if the human hand were to retreat—if the Great Black Swamp were allowed to return and rebuild itself? Can our two identities, our longtime, our past and present, reconcile in an imagined future?

The current water crisis, a direct result of our erasure of the swamp, is a timely reminder of our relationship to the environment, our identity, and the immense and balancing force of nature. Even so, we cannot reverse our history and cannot deny our agricultural identity that has made Ohio an icon of the American frontier. How do we move forward, acknowledging our collective past and taking ownership of our present, toward a reconciliation of our relationship to our home in the Great Black Swamp? Can the terrifying, inconvenient obstacle that was the Swamp be useful, informing our identity as a city and as a region? Can the constant state of struggle become our power and inspiration in moving forward?

This series of images imagines this future, one in which a tiny plot of swampy land begins to restore itself and reclaim its existence once again, bleeding into fields of corn and seeping across the peripheries of our human existence to form a productive partnership with our agrarian identity. In reality, each of Toledo’s identities, whether swampy, agricultural, industrial, or urban, requires that we take stock and give proper due to the forces that built them, and use these forces for continual reconciliation and renewal to give birth to a new Toledo, a new Ohio, and a new Midwest. 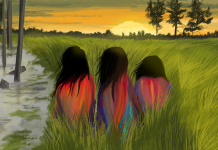 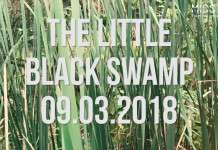