The weather had been hot for the last four days. Sun-blistering heat had hit the Midwest without warning, averaging a ruthless 104 degrees Fahrenheit. The neighborhood dogs exiled to the outside lay on the parched grass unmoving, steams of moisture evaporating off their lolling tongues.

Her newly painted home smiles at the passersby, like millions of other suburban homes plastically manufactured. And like them, it has not adapted to the local climate, does not know to capture the winter sun, ignores such natural laws of thermodynamics, and retains all rising heat neatly contained in the upstairs bedrooms. Even with the A/C on full blast, the air on the second floor felt stale, the result of regularly poor design principles established in the American suburbia.

As the news reporter warned, major heat waves were passing throughout the area, such as had not been in years: “Stay in, stay hydrated.” She shrugged, putting away the laundry, “I guess this is global warming.”

It was dusk when lightning struck the first tree in the community, the red-earth tiles of the poor man’s house cushioning the “THUD” of the severed trunk. No one was hurt. Against this dramatic backdrop, the girl’s home boasted a newly installed necklace of crystalline solar garden lights. Pinned regularly against the brick-lined landscape, the rings of light splattered radially outwards. Sparkling against the storm clouds, the house had never looked better.

Deep thunder roars just beyond the pine tree in front of the house. Trees all around shake. Half ignoring, half mirroring, the girl shook out her sheets. Outside her window, a solid wall of rain engulfed in a whirlwind bends five trees on her street. The kitchen lights wane; the ceiling fan sputters. Power out.

Loading another batch of laundry, the girl realizes halfway that the washing machine also uses electricity.  Too bad—she will have to wait a few more hours. Electricity is a commodity taken for granted, after all. Meanwhile, the view through the house windows behind her, obscured by the unyielding rain, resurfaces above the torrent every few seconds. Briefly visible through the glass pane, the basketball net flags in the wind. Branches and animals fly past her front door. Screeching.

All artificial humming gone, she feels the solid heat for the first time. The silence of home, helpless and dark before the splintering rage of the storm, closes around her like a glove. She tries but fails to open the window; the rain keeps pouring in, the wind busting the frame against the hinges.

“The silence of home, helpless and dark before the splintering rage of the storm, closes around her like a glove.”

Nearly impossible to breathe in this vacuum, there was no point in doing more chores. She spent the rest of the storm silent in her chair, shocked into stupidity and ennui.

When the storm went on to decimate other regions, she finally opens the door. A gust of cool wind flowed in through her driveway. She glances slowly around. A new calm pierced the street; a more open sky had been created. All this made possible by the felling of that pine tree in front of the house in the storm.

Birds were already chirping. With one glance, she observes the five roofs damaged down her neighborhood street. Another reveals her neighbor’s prized Japanese maple cracked in half. The alleyway of houses concentrated the gust of wind aimed directly at her home. And then, with new forensic clarity as she swept away the branches in her driveway, the girl realizes that the large pine tree had taken the brunt of the wind tunnel instead of her house.

“The alleyway of houses concentrated the gust of wind aimed directly at her home.”

As the sun set behind a stormy curtain, flickers of light appeared inside the house. They had found the flashlights and the candles and the oil burners. Laughter bubbled from the living room, shadows relegated to the back wall. No television for the evening meant more time looking at each other, more time hearing the voice of each person, and more time understanding their existences. She took out board games for the evening, a triangular prism of painted aluminum and rattling cardboard boxes. They read the instructions by candlelight, and then, throwing them aside, took out the pieces from the plastic bags, rolled the dice, and moved the pieces for the first time that night.

They all could already see the night as if in memory, slightly hazy but somehow sharper, too. Without power, they suddenly saw each other. There are blurry pictures on her digital camera of victors and losers, cards, and melted candles. 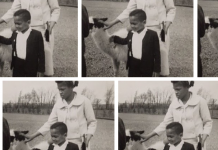 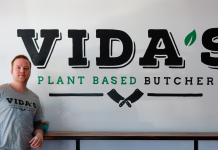 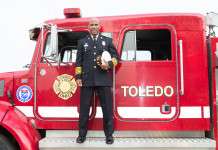 Working as a Hero, Living as an Example: Fire Chief Brian Byrd on Leadership During Crisis