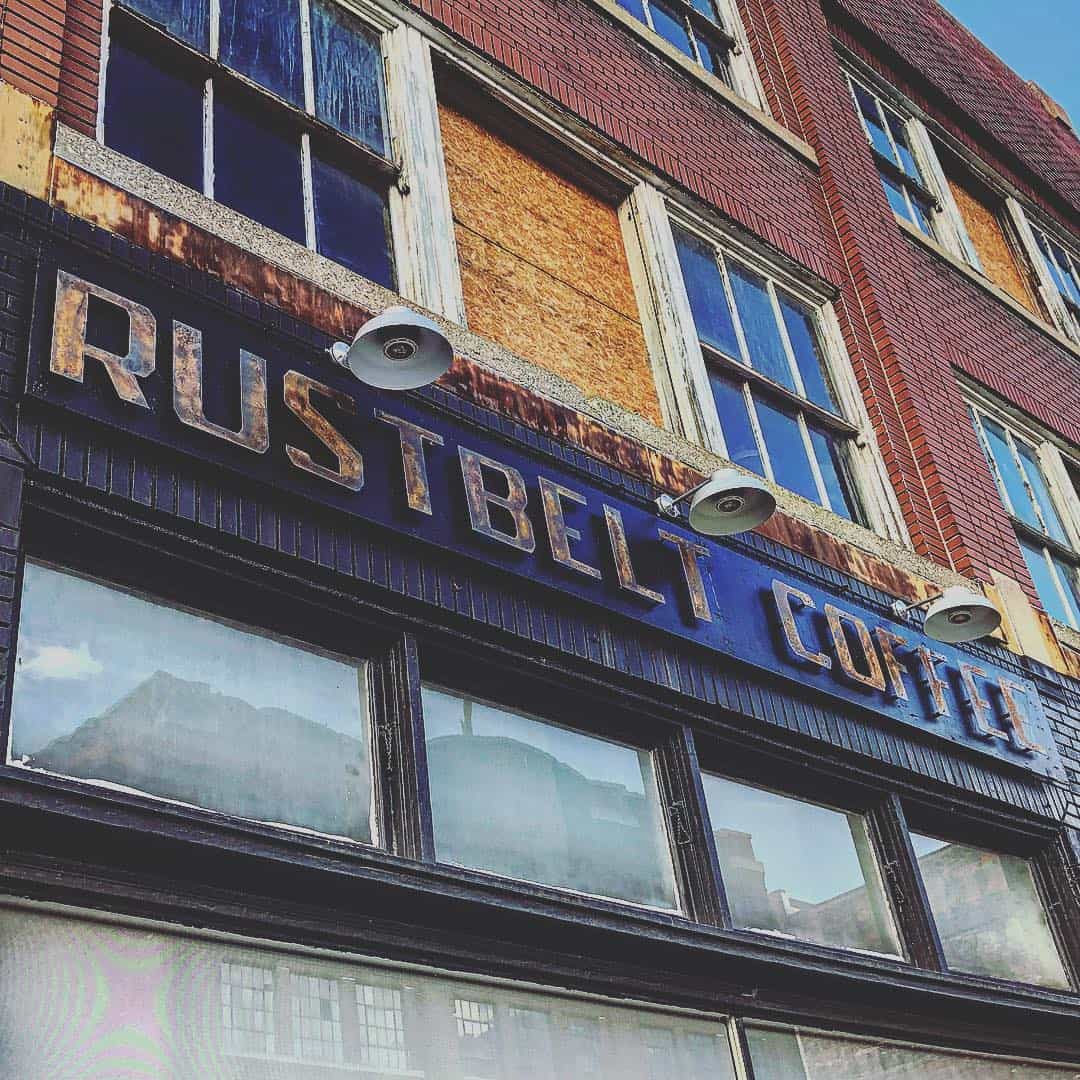 The endless rectangles of glass skyscrapers reflect light onto empty pavement. One parking lot, however, houses cars continuously. This stubby brick building might struggle to match the heights of its ancient, dilapidated neighbors, yet cleanly cut black metal signs hint at life within. The signs market businesses dealing in coding, furniture, and coffee, suggesting a city crawling toward a new identity. The building lacks the careful choreography of other urban centers—gym, juice bar, fitness apparel or venture capitalist, technology startup, luxury coffee. But the space inside expresses a thoughtful transition from local history to modern “city hub,” a wish painted in minimalist lines covering a crumbling brick wall.

Inside the shop, a repurposed Jeep hood introduces a co-working space. Printed stickers, scotch-taped word documents, and bold decals reflect both improvisation and careful planning. Fifty feet of wooden floor takes you from this Jeep relic to a punching bag clawing its way onto social media with a decal that screams, “Punch today in the face.” Meanwhile, Rustbelt’s main coffee-drinking area houses an aesthetic seemingly disconnected from the city’s suburban surroundings. Glasses frames thicken from functional, circular wiring to fashionable, thick square boxes. Beards curl from scruffy to dapper and hipster. An awkwardness travels through this space caught between repurposing history and embracing modern conceptions of productivity and desirability.

I wondered, why do I feel like I’m in Brooklyn or San Francisco in a half-abandoned industrial warehouse growing out of a deserted downtown?

Here, the old oil cans, reclaimed furniture, and aged walls tell a story. Countless coffee shops in San Francisco or Manhattan have recreated the same aesthetic, but many appropriate the grittiness of post-industrial America for coolness rather than necessity. There, someone has purposely stained the brick and scratched the floors to recreate years of labor and wear. In Toledo, progress has taken place slowly over the last thirty years, appearing subtly as new glass windows slowly replace the crooked black and brown teeth of an aged building’s facade.

We imagine Toledo as a space for creation rather than imitation. In Rustbelt’s case, this idea means visiting a coffee shop that feels authentically “Toledoan.” How does one achieve originality, however, when local history—and a post-industrial present—has been co-opted and monetized by others?

Cities’ cultural identities often mirror political and cultural changes. Examining Toledo’s revitalization reveals a reliance on youth and opportunity. Young people returning to Toledo will imitate coastal comforts at home, and in today’s digital age, even young Toledoans adopt the alluring coastal aesthetic under its guise as the only modern way of life. Toledo, however, offers downtown offices and massive storefronts usually only available to major corporations in other cities. Rebirth and revitalization transcend the aesthetic of incandescent lights and mason jars in Toledo. So how can these themes inform a coffee shop beyond commonly-used tokens of post-industrialism?

Rustbelt faces an opportunity that parallels the openings granted to early espresso shops in America. Italian Americans in New York imbued their drinks with cosmopolitanism and worldliness that attracted both the business elite and bohemians. Espresso became part of larger cultural movements. Countries that produce coffee’s raw products market images of plantations and coffee beans, but Italy sells thousand-dollar espresso machines and accessories designed by famous artists. Ironically, Rustbelt sells refined beverages yet finds itself closer to Burundi than Italy.

Consider a Starbucks. Symbols and pictures representing producer countries become places to lounge rather than thought-inspiring exhibits. Similarly, images of the post-industrial Midwest paint faded walls in generic coffee shops all over the coasts. Initially, Rustbelt seems to imitate a model that reduces post-industrial opportunity to background imagery. On the other hand, this building and these objects aren’t re-creations made to sell a post-industrial aesthetic. Many of the shop’s customers have lived the consequences of a post-industrial Toledo. They are not transplants looking for a trendy neighborhood. Maybe Rustbelt reflects a rising generation in the aura of post-industrial opportunity presented in Toledo.

For example, Rustbelt answers by thinking more deeply about these viral yet historical emblems of manufacturing. The Jeep desk’s hood has become more than a symbol of production like the coffee bean. Instead, the desk reflects the espresso machine–a new product renowned for its beauty and value that draws on a long history of local tradition. This repurposing conveys a rupture from the reproductive assembly line. Post-industrialism conveys not only upcycling and repurposing, but also a new valuation of artistry and creativity. These values exist in the Jeep hood desk, not in the mass-produced mason jars or incandescent light bulbs.

In asking what it means to reclaim a post-industrial aesthetic, one must decipher what the true context holds that the visual simulations lack. In an opening interview with The Blade, Rustbelt’s co-founder Grant Perry stated his wish to “see a coffee culture develop downtown.” Toledo must define this “culture” beyond switching drip coffee for espresso and wooden chairs for steel stools. Toledo offers the potential of a post-industrial emergence—young people have the chance to redefine a city of assembly lines and warehouses through creativity, opportunity, and artistry.

Furthermore, the shop parents an adolescent, new Toledo through non-profit status and a community space aiding other local organizations. This shop conveys its context through a commitment to creation. One cannot look at the young minds inside and consider them imitators of the coasts solely because their clothing and tastes for matcha reflect trends from other cities. This human capital that has come to Toledo actualizes a mission of revitalization. Rusted metal is not only chic here; the decay also conveys an urgency to replace lost industry. Rustbelt has redefined economic productivity to include communal success.

The shop’s website bears the motto “We aspire to inspire creativity through the power of coffee. You Can Do This.” This motto conveys discovery, for the shop “aspires to inspire” instead of inspiring, and the second line’s powerful affirmation suggests a need to overcome doubt. Coastal coffee shops might visually recreate this spirit, yet those spaces cannot provide youth with the genuineness, opportunity, and responsibility laid before those in the Rust Belt.