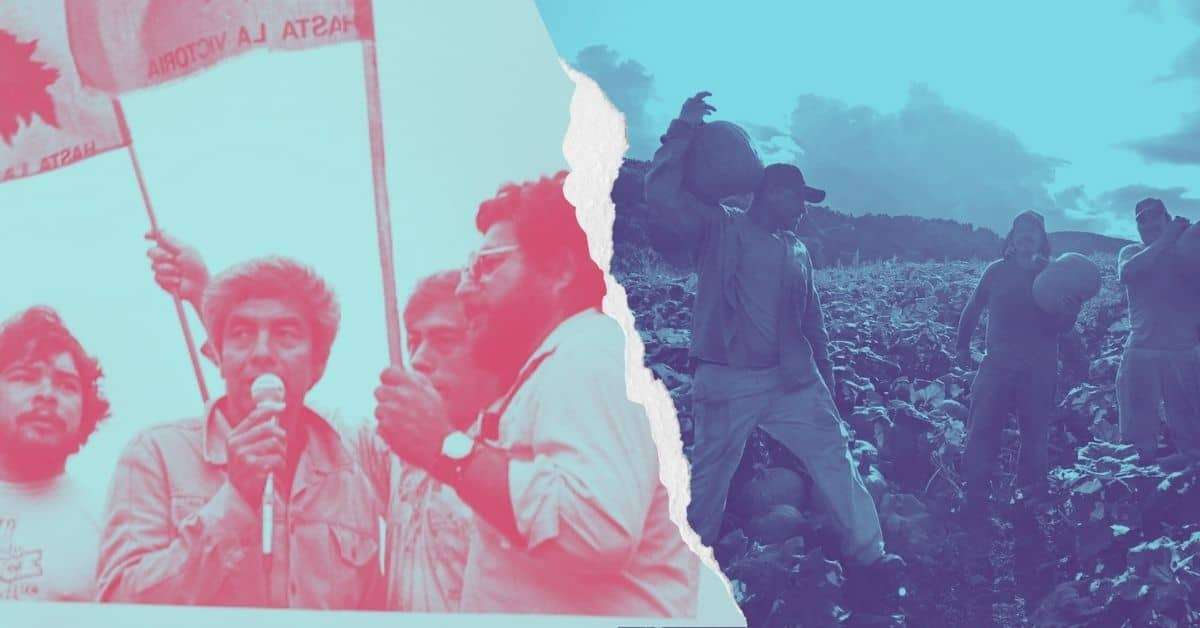 For most of his childhood in the mid-1900s, Sesario Duran’s family moved around in pursuit of work opportunities. His father worked for a railroad company in Texas, but during the summers, his family would travel north to states like Minnesota, Ohio, Oklahoma and North Dakota to work seasonal jobs in various agricultural industries. Eventually, in 1947, his family permanently settled in northwest Ohio to work in the region’s cucumber and tomato fields.

Adjacent to the Great Lakes — one of the planet’s largest freshwater ecosystems — Ohio has long been prime territory for farming and agriculture, from when the region’s Indigenous peoples relied on the land for subsistence farming to when the region became a center of industrial agriculture in the 18th and 19th centuries, after colonization and the forced displacement of Ohio’s Indigenous populations.

Nationally, only one percent of farm workers belong to a union, and advocates say that since some of them are undocumented, they’re less likely to speak out or contact law enforcement if they experience wage theft, discrimination, sexual harassment or unsafe working conditions because they fear deportation.

“[Immigration reform] is directly linked to labor rights for these workers,” Beatriz Maya, the director of La Conexión, a Latinx advocacy group based in northwest Ohio, said.

But while labor activism is a central concern for many immigrant organizations in present-day Ohio, it isn’t a new one. Toledo and northwest Ohio have a rich history of immigrant labor activism, including strong union organizing as well as some of the nation’s most high-profile strikes and boycotts.

Duran’s long history with agricultural labor means he’s also well acquainted with the struggles of immigrant and migrant workers in the region.

“It was easier for me to understand the problems with farm work, because I came from a family of farmworkers,” Duran said.

Labor conditions were often difficult, Duran said, and farmworkers — who weren’t provided with medical insurance — were exposed to dangerous pesticides while working in the fields.

Further, farmworkers were — and still are — excluded from many of the labor protections that other American workers are entitled to. The National Labor Relations Act of 1935 (NLRA), which guarantees the right of private employees to form or join unions, explicitly excludes agricultural laborers, making it difficult for agricultural workers to voice concerns or negotiate with their employers.

If workers in other industries wanted to form a union, they could petition the National Labor Relations Board (NLRB), which administers the NLRA, to administer secret-ballot elections to see if a majority of workers at their business or industry wish to be represented by a union. That’s not an option for agricultural workers.

“If we want to have a union, we can’t just call on the NLRB,” Duran said. “We were excluded then, and we’re still excluded from that even now,”

After his family settled in Ohio, Duran served in the army and studied sociology and psychology. In the 1960s, Duran met Baldemar Velasquez, a labor activist who was beginning to organize farmworkers in northwest Ohio. Duran quickly got involved with organizing alongside Velasquez and other migrant labor activists. In 1967, Velasquez founded the Farm Labor Organizing Committee (FLOC) in Toledo, an advocacy group for migrant farm workers that would eventually evolve into the Midwest’s strongest migrant farmworkers’ union.

“When we were organizing… they would take us to jail in Lucas County, in Putnam County, Hancock County, Fulton County,” Duran said. “Then they let us go so we couldn’t take it to court.”

Duran said that FLOC spent its first 10 years building a base for large-scale action, organizing both migrant workers and ex-migrant families — people who had come to Ohio as migrant workers, then settled permanently to work year-round jobs.

“You always organized one family at a time,” Duran said. “So you would go to one family, then another family.”

FLOC built momentum throughout the 1970s, pressuring growers and corporations to sign contracts with farmworkers that would ensure safe living and working conditions. Duran said that while many growers were willing to negotiate with migrant farmworkers, large corporations that were buying agricultural products from northwest Ohio often were not.

“After a while, we began to realize… the grower is not the real problem, the grower is not really the employer,” Duran said. “[Corporations] above the growers, they had more power… Then, we started to organize with the idea that we had to go after the real employers, which were the corporations.”

One major corporation buying agricultural products from northwest Ohio was the Campbell Soup Company. In 1978, farmworkers demanded a guaranteed minimum wage, an end to pesticide spraying while workers were in the fields, outdoor plumbing in the migrant camps and worksite toilets. When Campbell refused to negotiate, FLOC helped launch the largest agricultural strike in the Midwest’s history in response.

Over 2,000 migrant workers participated in the Campbell Soup Strike over eight years. During those years, Campbell sent anti-labor advisors to northwest Ohio growers and attempted to hire strike-breakers. Duran said it was incredibly difficult to ensure that picket lines remained filled every summer for eight years.

On top of striking, FLOC organized a boycott against Campbell Soup Company. Some schools dropped out of Campbell’s “Labels for Education” program, while other organizations, like the University of Chicago, divested from the company. In 1983, FLOC organized a march from Toledo to Camden, NJ, where Campbell’s headquarters were located. It was a 550-mile journey, and the workers held demonstrations in several cities along the way.

The three-way contract also eliminated “sharecropping” agreements, where farmworkers were classified as independent contractors rather than employees. These types of agreements made farmworkers ineligible for Social Security benefits and allowed growers to hire children, avoiding child labor laws since child workers weren’t technically classified as “employees.”

Despite the large successes FLOC achieved in the late 20th century, Duran and other labor organizers said that immigrant and migrant agricultural workers still face challenges — some new and some old — today.

Today’s immigrant and migrant labor activists are concerned about the way that immigration law and enforcement impact the rights of immigrant and migrant farmworkers. Beatriz Maya, the director of La Conexión, said that since many workers today are undocumented, they fear seeking recourse if their workplace rights are violated.

Since the 1990s, the number of undocumented immigrants in the U.S. has increased, rising from 3.5 million in 1990 to 10.5 million in 2017. That increase has largely tracked with immigration laws, such as the Illegal Immigration Reform and Immigrant Responsibility Act of 1996, that have made it difficult for immigrants to gain citizenship, and have recruited local law enforcement to help enforce increasingly stringent immigration law.

“There are [worker protections] under the law or on paper that do apply [to undocumented workers], but the reality is that undocumented workers pretty much don’t have a public life. They are afraid of making any fuss if their rights are not respected at work,” Maya said. “So that means that the immigration law, as it is, really is a tool for worker exploitation.”

Duran said that women farmworkers may face unique risks of sexual harassment or violence, especially if their immigration status makes it difficult for them to seek recourse through legal channels.

Local police involvement with immigration enforcement and deportation breaks trust between undocumented workers and the legal system, Maya said. To her, policies that limit police involvement with immigration enforcement, as well as laws that provide a path to citizenship for undocumented farmworkers — including proposed legislation like the Citizenship for Essential Workers Act, the U.S. Citizenship Act or the Farm Workforce Modernization Act, which passed the House in 2021 — are essential to securing labor rights among migrant and immigrant communities.

At the local level, Duran said that FLOC is partnering with racial justice organizations to  address relations between law enforcement and immigrant workers in northwest Ohio through the Black/Brown Unity Coalition. In 2017, they helped implement a Code of Conduct with the Toledo Police Department surrounding use of force and community-police relations.

Following national trends, northwest Ohio has also seen significant growth in migrant workers being recruited through the federal H2-A guest worker program, which allows agricultural employers to hire workers from other countries on a seasonal basis.

José Salinas, the director of the Ohio Migrant Education Center, said that these guest workers are at unique risk of workplace exploitation because their visa contracts lock them in with one specific employer. A national survey conducted by Centro de los Derechos del Migrante, Inc., a pro-migrant worker organization, found that in 2019, 45 percent of agricultural guest workers experienced overcrowded or unsanitary housing, 35 percent were not given necessary safety equipment, 43 percent were not paid the wages they were promised, and 86 percent reported that women workers — if they were hired — were “offered less favorable pay or less desirable jobs than men.”

Additionally, Salinas said that guest workers are at higher risk of mental health challenges, since many of them are separated from their families for months on end.

“We’ve had situations where maybe there’s a death in the family, or a child got hurt, or there’s domestic issues going on at home,” Salinas said. “They may come excited, ready to work, and part way through, they go through a deep depression, especially if they stay in contact with the families back home and there’s trouble.”

On top of immigration law, exploitation and policing, Salinas said that access to education is a challenge migrant workers and their families often face. Since families move around throughout the year, migrant children may experience educational gaps and discontinuities, sometimes causing them to fall behind their non-migrant peers. Salinas said that about 1,000 children in Ohio are eligible to receive migrant-specific educational support through the federal government’s Migrant Education Program.

Some of these students take buses to summer school programs aimed at addressing the specific educational needs of migrant children. But Salinas said that participation at brick-and-mortar school programs drops after 5th grade, because children can legally work on farms with parental consent when they turn 12. In order to serve children who are working — or those who aren’t living close to an education center — Salinas said that teachers working with a program called Improving Migrant Academic Gain Educationally (IMAGE) travel to various migrant camps throughout the state to provide on-site lessons.

In Ohio, Salinas said, many of these workers speak K’iche’, an Indigenous language from Guatemala. A growing population of workers in Ohio also speak Marshallese, a Polynesian language native to the Marshall Islands.

In order to overcome language barriers and ensure that Indigenous and Marshallese migrant workers have equitable access to education, Salinas said the migrant education program is looking to increase the number of teachers and staff who speak languages like K’iche’ and Marshallese.

As advocates look to immigration as a path to revitalizing Toledo’s economy, immigrant and migrant worker advocates are drawing on the region’s long history of labor and union activism to address persistent challenges, including police-community relations, worker rights and education access. At the same time, they are battling new obstacles, such as guest worker programs, more stringent immigration laws and increasingly diverse migrant and immigrant worker populations.