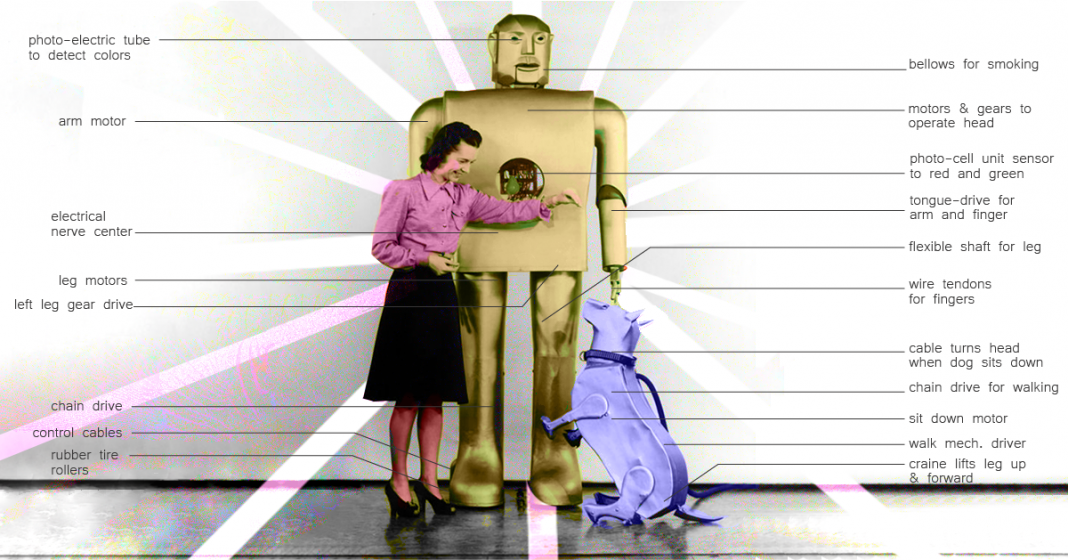 The seven-foot-tall, steel-framed humanoid was “the product of 13 years of mechanical intellectual and cultural development” since Westinghouse Electric Company invented its first cardboard-bodied Herbert Televox. He was set to debut at the 1939 “World of Tomorrow” international exposition in New York.

“Elektro is ready to go places and do things,” the Harrisburg Sunday Courier wrote in the days before he left Mansfield.

In New York, Elektro was a sensation. Reporters called him a “glamour robot” and said he looked like “a streamlined model of a man from Mars.” Inside his gold aluminum exterior, over 900 parts — motors, gears, photoelectric cells, electric relays and “enough wire to encircle the earth” — powered Elektro to “do several tricks no robot has ever done before.” Before six million fairgoers, the mechanical man walked forward and backward, counted on his fingers and smoked a cigarette. He distinguished between red and green lights and spoke 77 words in response to human voice.

“I am a smart fellow,” Elektro told crowds, “as I have a very fine brain.”

At a moment when many Americans had just gained access to electricity in their homes, Elektro represented the possibility for electricity to transform their daily lives. In particular, Westinghouse imagined a future in which each family had its own humanoid robot to perform household chores.

“It may seem that Westinghouse engineers have gone to a lot of trouble and expense just to create a mechanical man,” the Mansfield News-Journal wrote in 1939, “but they point out that they haven’t created just a mechanical man. They have dramatized the use of the photoelectric cell—shown the layman what advances have been made in electricity.”

Westinghouse Electric Company, headquartered in Pittsburgh, opened a factory in Mansfield in 1918. At that time, the city was a thriving center for manufacturing and trade. It had been so since the 1880s, following the addition of railroads that connected Mansfield to the rest of the country. Still, the introduction of Westinghouse, with its international renown, marked a new potential for local manufacturing.

“The bringing to Mansfield of this exceedingly desirable industry is another forward stride for this city,” the News-Journal wrote, “the full extent of which can scarcely be realized at the time.”

Over the next few decades, manufacturing grew, and the extent of Mansfield’s industrial success became clear: the city drove production and innovation that in many ways shaped the “world of tomorrow.”

Mansfield was home of the Tappan Stove Company, which invented the insulated oven and designed the first home microwaves. The Mansfield Tire and Rubber Company rivaled Goodyear and Firestone. The Ohio Brass Company led the growing streetcar industry and later the power transmission industry with its transistors, insulators and transformers.

And there was Westinghouse, which at its height, employed 8,000 residents — a quarter of the local population. The Mansfield factory built home electric appliances, aiming to redefine domestic life.

In 1934, Westinghouse opened its “Home of Tomorrow,” a house which displayed its novel technologies to the public — bringing over 100,000 visitors to Mansfield over two years — and served as a lab for the company’s engineers. With electric clothes dryers, radio-controlled garage doors and infrared-ray lamps that “reduce[d] housekeeping to a matter of dials and buttons,” the home, the local paper wrote, “was the most completely electrified home in America.”

After the New York world’s fair closed in 1940, Elektro — and his new mechanical dog, Sparko — hit the road.

Traveling thousands of miles with a different salesman each year, Elektro and Sparko performed at state fairs and department stores. They starred in television ads. Elektro told crowds that Sparko was “Westinghouse-broken” and that he bought his clothing from “Sears-Robot.” Sparko wagged his tail, begged and barked.

Despite his commercialized role, Elektro continued to spark the public’s imagination. Audiences envisioned robots cleaning their houses and fighting in wars, avoiding the devastation felt by families whose sons had left for combat in World War II.

“He tells the kids about his diet of nuts, bolts, and paper clips,” the News-Journal wrote in 1955, “and lets them touch his copper-painted aluminum ‘skin’ just to prove his heart’s in the right place, wherever that may be.”

In the late 1950s, though, Elektro and Sparko lost their novelty. Ultimately, the duo was separated and disappeared from the public eye.

In the 1980s, Sparko resurfaced. Found in a box in a private home, broken, the forty-year-old mechanical dog was scrapped for aluminum. The location of his humanoid companion would remain unknown for years.

Scott Schaut, a history enthusiast, moved to Mansfield in 1995. When he discovered the building for the city’s Victorian-style Memorial Museum, which had closed five decades earlier, he asked to see what was inside.

“I couldn’t believe what I was looking at,” Schaut said. He was looking at historic collections of sea shells and minerals, taxidermied birds and insects, Civil War and Native American memorabilia — all in their original glass cases.

“I went to the board and said, ‘This is a crime, and it needs to be reopened to the public,” Schaut said. The museum reopened in 1999, and Schaut became its second-ever curator.

Since then, Schaut has expanded upon the original collections and arranged exhibits explored by thousands of visitors each year. Now, the museum tells the story of African American families in the region from the pre-civil war era to the 1930s. Schaut archives and digitizes every historical Mansfield newspaper that he can find. He’s building an exhibit on Mansfield’s aviation history, which will focus on pilot Frank P. Lahm: the first military passenger to fly with Orville Wright, an aerial balloonist in World War I and a leader in the development of the United States’ first military airbase. This summer, a display of more than 250 small appliances by Westinghouse will become the largest of its kind.

“I always tell people when they come in, ‘There’s something here for everybody,’” Schaut said. “But, of course, the thing that brings everybody to the museum is my baby, Elektro the robot.”

For years, Schaut had dismissed Elektro, believing skeptics’ accounts that the robot’s voice was really a human speaking into a microphone offstage, or that his movements were controlled by a joystick. His perspective changed in the early 2000s, when his archival work led him to read several newspaper articles on Elektro.

“I got very intrigued,” he said. “So it took about two years. I found the body.”

Elektro’s body, Schaut discovered, had been inside a Westinghouse truck — with “Elektro” painted on its side — sold to a car salesman in the 1980s. The torso and legs occupied various storage units over the following decades. Then, Jack Weeks, the son of a Westinghouse engineer who helped build Elektro, purchased the body for the museum. Years earlier, the robot’s head had turned up in the basement of a Mansfield house bought by Weeks’ brother.

Elektro the Moto-Man, newly reassembled yet no longer functional, debuted in the Mansfield Memorial Museum in 2004.

It wasn’t just Elektro, though, that had changed. The city he returned to was not the one he left.

In the 1970s and 80s, manufacturing in Mansfield — like that of other Rust Belt cities — declined. Industry jobs moved to the Sun Belt, and then abroad. Westinghouse closed its Mansfield factory in 1990.

“Mansfield is only like most cities,” Schaut said, “as it is just the shadow of what it was.”

But with Elektro and other local inventions, the museum shows visitors what the future used to look like.

“What the town invented, what it manufactured, was astronomical,” Schaut said. “Mansfield changed the lives of millions of people.”