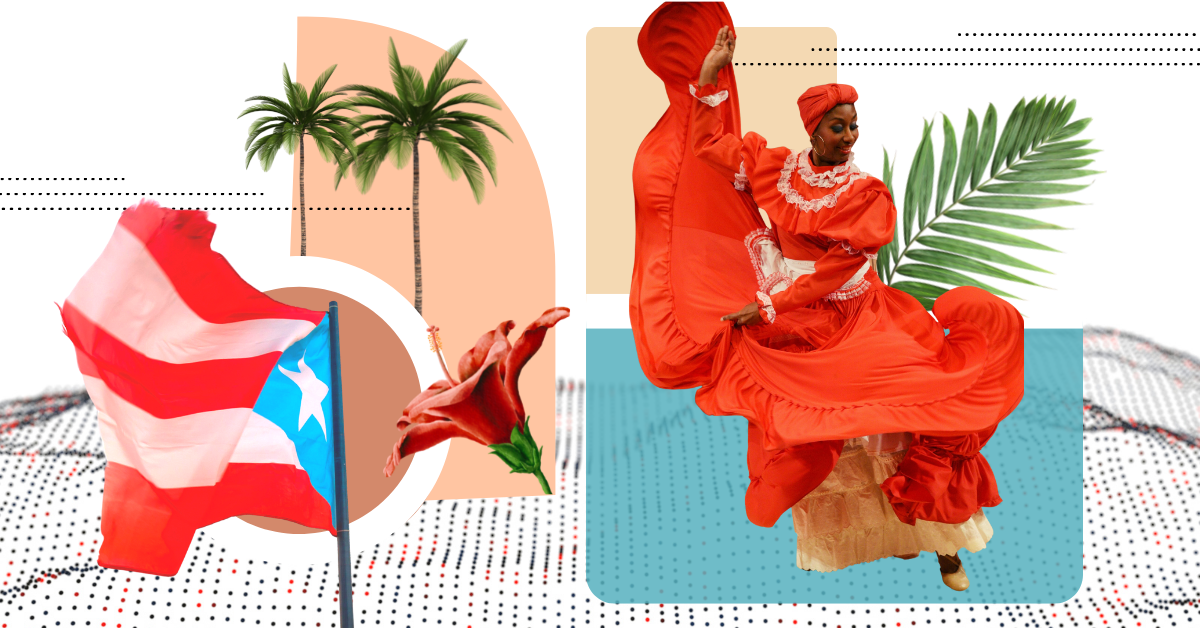 Visit Chicago and you’ll likely find its Chinatown, Greektown and Little Italy on your list of must-see sites. But swing by the lower section of Division Street in Humboldt Park, and you’ll see two, larger-than-life Puerto Rican flags enveloping one of Chicago’s most vibrant Puerto Rican communities: Paseo Boricua, which translates to “the Puerto Rican promenade” and is described as a “pedacito de patria,” or small piece of the homeland.

If the two sculptures that define the community’s boundaries are an indicator of its vibrance and character, they certainly don’t disappoint: made of 45 tons of steel each and painted a bright red and blue, they clock in at 56 feet tall and 59 feet wide. They’ve won numerous American Institute of Architecture Awards and gained preliminary landmark recommendation from the Commission on Chicago Landmarks this past April.

But they’re more than just a physical landmark or even a symbol of the grandeur of the community they enclose; they also represent an active effort from the community to uplift the neighborhood and showcase the rich culture and history of Chicago’s Puerto Rican population. Billy Ocasio, former city of Chicago alderman and now the President & CEO of the National Museum of Puerto Rican Arts and Culture, helped bring together the community to raise funds for the now-iconic flags, designed by local architecture firm DeStefano and Partners, during his time as alderman.

According to Ocasio, the flags also marked a turning point for the neighborhood. He estimated that there was about 83% vacancy rate on Division Street before the flags went up, and within five years, it reached 76% occupancy with primarily Puerto Rican-owned businesses.

“By putting up the flag, [I wanted] to create a sense of pride and bring people back into the neighborhood,” he said.

Over the past decade, Puerto Ricans have made up between 3% and 4% of Chicago’s population, although in recent years, that number has been decreasing. Nonetheless, the community has had growing influence, especially through arts, culture and food. Today, Puerto Rican Chicagoans primarily comprise neighborhoods in Northeast Chicago, where you will find Paseo Boricua, the U.S.’s most densely commercialized Puerto Rican business district.

Paseo Boricua, however, was not the original destination for most Puerto Rican residents in Chicago.

In the 1940s the U.S. federal government and Puerto Rican Governor Luis Munoz Marin initiated “Operación Manos a la Obra,” or “Operation Bootstrap,” created to boost the economy in Puerto Rico after the Depression. But high production and low wages alongside poor working conditions led hundreds of thousands of Puerto Ricans to the U.S., with many settling in Chicago and New York, which both boast relatively large Puerto Rican populations to this day. Large waves of Puerto Rican immigrants came to Chicago after Puerto Rico became a commonwealth of the U.S. in 1952. Many sought employment in the steel industry, to which the Paseo Boricua’s steel flag sculptures pay homage.

In the mid-twentieth century, Chicago’s Puerto Rican population was concentrated in the Lincoln Park and West Town neighborhoods. During the mid-1960s, a series of urban renewal programs forced Puerto Ricans to relocate to Humboldt Park. Perhaps more gentrification than “urban renewal,” these programs aimed to modernize the city through demolition, slum clearance and rehabilitation.

When Puerto Rican Chicagoans first arrived on Division Street, or “La Division,” in the mid-1960s, the community struggled with widespread violence, drug activity and poverty. In 1966, the neighborhood was the setting for one of the most well-known Puerto Rican riots after police shot a Puerto Rican youth.

In recent years, a vibrant and strong Puerto Rican community has developed on Division Street, largely thanks to community advocacy. Ocasio, born and raised in the “heart of Humboldt Park,” had a lot to do with it.

Ocasio began his career in local politics after one of his friends was killed by police, pushing him toward advocacy work. He began working in low-income housing, and pivoted to activism through the Center of Community Leadership and Development before he became alderman in 1994, a position he would hold for 15 years.

At the same time, the Puerto Rican community in Humboldt Park was being threatened by creeping gentrification, a phenomenon that had already had dire effects for the Latino communities in surrounding neighborhoods like Lincoln Park, West Town and Garfield Park, many of whom had moved into Humboldt Park for the same reason.

The locals started noticing the cleaning of the lagoon and beach, the fixing of both the boat house and field house and the restoration of the infrastructure of the park — improvements that, while great for neighborhood beautification, also had some residents and activists worried that Puerto Rican residents would be forced out.

To encourage new development while still safeguarding the Puerto Rican residents on Humboldt Park meant that out of all the new units that were being created, 30% of them needed to be listed at prices affordable for people already living in Humboldt Park. Ocasio also set up forgivable loans for small businesses that wanted to establish themselves in Paseo Boricua, further stimulating the neighborhood’s economy and providing opportunities to its residents.

Today, Paseo Boricua spans six blocks filled with authentic cuisine, cultural music, and — most importantly — a connected community. Its storefronts are occupied by restaurants, shops, small businesses and non-profit organizations like the Mildred Franks Foundation, Blocks Together and the Children's Place Association's Child Thrive. Each June, the neighborhood hosts “The People’s Parade” and “De Bandera a Bandera,” a festival to commemorate the neighborhood’s Puerto Rican flags held in early September.

Nilda Flores-Gonzales, a professor at Arizona State University, recalled her experience returning to Chicago in her essay “Paseo Boricua: Claiming a Puerto Rican Space in Chicago”:

“I returned in 1995, only to find that ‘La Division’ was now also called ‘Paseo Boricua.’ I was astounded to see the beautification of the area, and to find myself, as many other middle-class Puerto Ricans from the suburbs, attending festivals there.”

Paseo Boricua is also becoming a destination for tourists and Chicagoans from other neighborhoods, as well, but has never lost that authentic flavor.