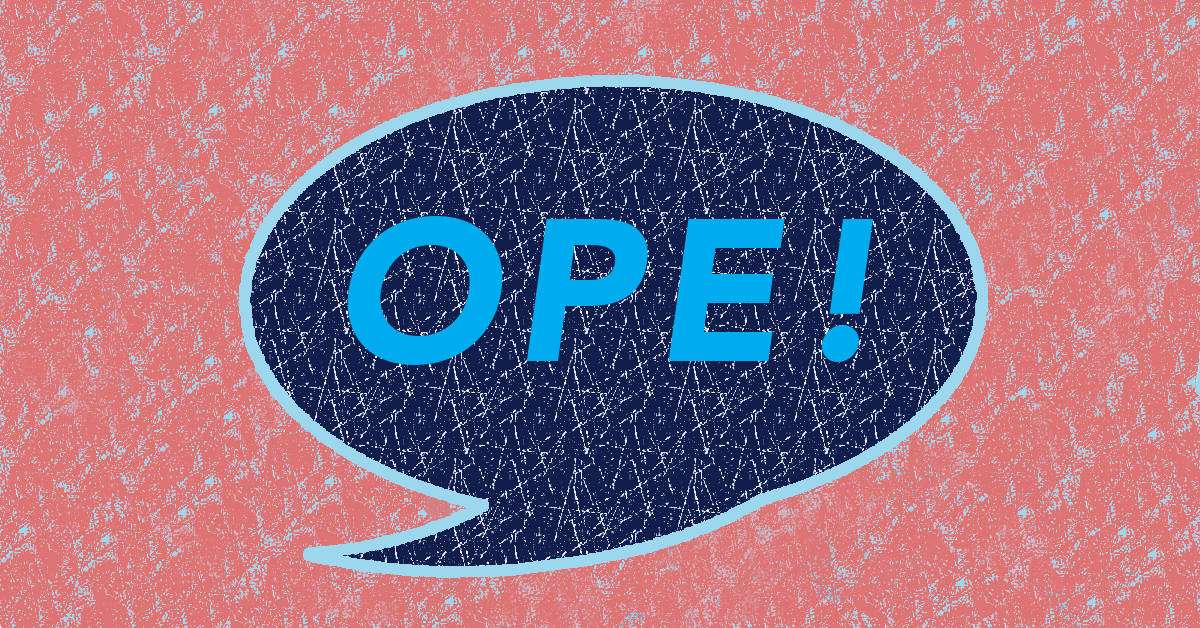 Leaving the Midwest for the east coast naturally came with a bit of culture shock. Like hearing someone describe a painfully long drive they once had to make, to reveal only later that it wasn’t much longer than the once-daily drive to my Ohio high school. Or people smiling a little less often when walking by on the street, and certain phrases—like “ope, let me just sneak past ya”—causing a moment of fascination as we reconcile regionalized versions of English. It’s interactions like these that make me resonate with the viral Twitter jokes made by @midwestern_ope.

and grab some ranch

Going by the name “Midwest vs Everybody,” the account joined Twitter in February 2018 and has since captured quotidian Midwestern experiences in over 1,000 tweets and counting. It spent its early months, however, almost exclusively retweeting the @IowaChill account. Later in June, the account had its first viral tweet: an attempt to settle the debate between “ope” and “oops!” through a “retweet” versus “favorite” vote. 33,500 retweets later, the Twitter-verse handed the victory to “ope” and the account now regularly creates original content (and its profile picture is a lasting nod to the win).

Since its first viral tweet, the account has grown to over 283,000 followers—including the likes of Chasten Buttigieg—and has had dozens of tweets receive over 20,000 engagements in the form of retweets and favorites. Its most viral tweet received approximately 200,000 engagements, and all it featured were Midwestern translations of the phrases “no yeah,” “yeah no” and “yeah no for sure.”

Yeah no for sure = Definitely

Midwest vs Everybody also isn’t alone in its reveling in the quirks and identity of a place. There’s the aforementioned @IowaChill account with its focus on Iowa and mission of “proudly representing and defending the people of the heartland,” as stated in its Twitter bio. Other accounts take an even more local approach, like @CincyProblems, which has been teasing Cincinnati and its residents since 2011; it even counts multiple City Council Members, journalists and other public figures among its followers. Meanwhile, the @Toledo_Tweets account mixes the humor of these other accounts with some purely informational tweets about the community.

While relatability  may be the non-unique marketing strategy of the social media-influencer era, it seems to truly be Midwest vs Everybody’s key to success. One of the top replies to the account’s most viral tweet jokingly writes, “im in this tweet and i dont like it” (a play on Twitter’s tweet-reporting mechanism), just one of many that empathize with the Midwestern stereotypes portrayed on the social media platform. This reply alone received over 2,000 favorites.

While big businesses pour millions of dollars into their pursuit of relatability, it doesn’t seem to be very difficult for an account like Midwest vs Everybody to achieve it. With its obvious focus on the Midwest and Midwesterners, the account achieves relatability primarily by sending tweets that highlight a place’s characteristics—what it’s like to simply exist in a certain place and people’s general behavior, language and interpersonal mannerisms. Nearly all of Midwest vs Everybody’s tweets can, in fact, be sorted into one of these categories.

One viral tweet describing the Midwest pokes fun at the propensity of pot holes in the region’s roads after a winter snow melts.

“The snow is gone it’ll be nice to drive again!”

Another tweet attempts to capture a uniquely Midwestern outlook on life.

You either ope this world or it opes you

There are tweets that portray classic Midwesterner behavior and language.

But the most insightful or charming tweets from Midwest vs Everybody might just be the ones that highlight the most run-of-the-mill manners by which many Midwesterners live by. These jokes might depict very average experiences, but they reach toward some of the foundational qualities that shape life in the Midwest.

Midwest vs Everybody takes a decidedly apolitical approach to distilling the Midwest, and it’s refreshing after years of media attempts at figuring out the region’s politics; the accounts’ followers simply and lovingly revel in the Midwest’s quirks. And separate from the political weight of the Midwest exists a regional identity that tends to be forgotten in a national media landscape concentrated on the coasts. Perhaps the lighthearted poking-fun at the Midwest and the resonance it’s achieved on social media also point to a growing recognition of a distinctive Midwestern identity—or, at the very least, a group of collective identifiers of the Midwestern experience—and a desire to take what was once looked down upon and re-appropriate it as a source of connection and comfort in an ever-changing world.

Twitter accounts like Midwest vs Everybody help remind us—those of us living in the Midwest, those only visiting home on holidays or even those just watching from afar—of the characteristics and people that make the Midwest feel like home. In the course of one tweet and our resulting chuckle, the geographic, social and cultural barriers that have long isolated the region suddenly melt away—even if only for a moment.

Midwest vs Everybody did not respond to a request for comment.