A few decades ago, ask an Ohioan if they’d like boba in their tea, and you’d probably be met with a blank stare. But things are changing.

Nowadays, Americans are incorporating international cuisine into their palate more than ever. A survey by “Food Insight” reports that 29 percent of Millennials are choosing to shop at minority-owned businesses for their food. There’s also been a recent influx of international students over the years, fortifying demand for international ingredients and foods.

Grocery stores have responded to this recent increase by supplying more international foods, including in less diverse areas like the rural Midwest, where classic American groceries like Kroger, Meijer and Walmart now feature water chestnuts, mochi and red bean paste.

Yet international food aisles are not without controversy. David Change, founder of the famous culinary brand Momofuku, said that the structure of international aisles is a segregationist relic of the 1950s; in an interview with the Washington Post, he said the idea that Italian olive oil can be incorporated in the general sauces aisle while sesame oil is limited to the international foods aisle perpetuates a negative “forever-foreign” trait to these cuisines.

But for many immigrant communities, a well-supplied international foods aisle goes a long way. Considering the fact that the Midwest is not the most ethnically diverse region of the U.S., obtaining authentic ingredients can be a challenge.

Ten years ago, one of the biggest challenges for my Chinese family was finding ingredients to cook our meals. We often drove 50 miles from our home just south of Toledo, Ohio out to Huaxing Asian Market in Ypsilanti, Michigan in hopes of purchasing bok choy, bamboo shoot dumplings and rice noodles. Upon returning from our weekend excursions, we would end up hauling back two 50-pound bags of rice to feed our family of five for long enough until we were ready to make the trek north again.

Like my family, my Korean-American friends would organize travel to the Galleria Market in Ann Arbor, Michigan and my Japanese-American friends would make the 70-mile trek up to One World Market in Novi, Michigan. For perspective, one Korean-American supermarket chain, HMart, boasts 97 locations across the U.S. In the Midwest, however, HMart only has six locations, five of which are located in the Chicago area. 99 Ranch Market, another popular Asian supermarket, has 54 locations across the U.S., with none established in the Midwest.

Recently, though, as I was strolling the aisles of Kroger, to my amazement I found bags of rice, aloe drinks and lychee jelly in its international aisle. More authentic brands such as Nissin Raoh and Nongshim lined the racks in place of La Choy’s canned Kung Pao chicken meals. Today, my parents no longer need to drive an hour to get vegetables because Kroger sells napa cabbage, daikon radish and Shanghai bok choy.

Within these grocery store chains, international food aisles have flourished in recent years to accommodate the demand for more diverse foods. A 2019 interview with Jody Kalmbach explains the Kroger company’s approach to international foods. Through their digital merchandising research, Kroger has recently refocused its efforts in reinvigorating its international foods aisles.

And Kroger’s not the only one; Meijer and Walmart have followed suit in diversifying their product selection. To check out just how diverse the international foods aisle has gotten, I decided to analyze the offerings at a store familiar to me personally; at a local Meijer in Bowling Green, OH, there are currently 652 international food products for consumers to choose from.

Asian foods make up nearly a third of the products in the store’s international food aisle, but Hispanic-influenced cuisines dominate their offerings at 48% (for comparison, Bowling Green’s population is less than 2 percent Asian and about 6 percent Hispanic). Tex-Mex brands like Old El Paso and Taco Bell that raise some eyebrows over their authenticity make up a large contribution to the Hispanic foods category, but Meijer also offers a variety of authentic Mexican brands like Jarritos, a Mexican soda.

Representation still has a long way to go though. For consumers interested in African dishes, key seasonings and ingredients like cassava flour and tamarinds are essentially nonexistent.

For example, Meijer’s singular, overarching “Asian” category encompasses a wide diversity of countries with only “Indian” scoring its own classification, while distinctions made for European cuisine range from Dutch to German and British. These categories not only generalize and perpetuate those generalizations within the American social consciousness, but also obscure chasms of representation within the store’s offerings as well; Chinese and Korean foods both fall under “Asian,” but this particular Meijer had scant Korean offerings when comparing the two.

Of course, grocery store product selection relies heavily on catering to the ethnic makeup of local populations (and, in this case, Bowling Green State University’s rising international student population could have something to do with it), but perhaps intentionally curating international aisles to serve more underrepresented countries could help local communities gain global perspectives, even in less diverse settings.

Interest in ethnic foods, however, goes far beyond the physical boundaries of the international foods aisle at your local grocery. In particular, Asian cultures’ presence in mainstream media has caused Americans to take new interest in ethnics foods. In teen-romance movie “To All the Boys I’ve Loved Before,” the protagonist (who has a Korean background) urges her love interest to try Yakult, a sweet and sour probiotic Japanese dairy drink. The rise of Korean artists like BTS has led to an interest in young people trying kimchi, the national food of Korea. The assortment of colors and iconic black pearls that make up bubble tea — which originated in Taiwan — has made it a popular beverage for social media posts.

According to Google Trends, the search term for “bubble tea” in Ohio has been on the rise since 2010, and new locations of stores like Kung Fu Tea are opening in locations outside of its core west or east coast operations (one just opened 40 minutes north of Bowling Green in Toledo in August of this year).

While Americans’ interest in ethnic foods is certainly on the rise, the truth is that American cuisine has always been a fusion of different cultures. And while the food options in rural Ohio — or rural anywhere, for that matter —  may not perfectly reflect that, the international food aisle remains an important part of my American experience. As much as I fondly remember those long family trips up to Michigan to buy Chinese ingredients and eating some of the snacks on the way home, I also remember making late night shopping trips with my dad to Kroger with the intention of nabbing Jarritos and tortilla chips for my Spanish class’s potluck days.

While my small town may not yet be able to financially sustain a flourishing Chinese grocery or a homegrown African spice market, the accessibility of international food aisles — and innovation in their marketing, categorizing and offerings — can help cultivate a future generation that has exposure to and appreciation for ethnic foods, no matter the location. For small town Midwest communities like mine, international food aisles are a vital resource for preserving and cultivating culture. But for the country at large, heightened accessibility to international foods could propel the evolution of American cuisine — as it’s always done. 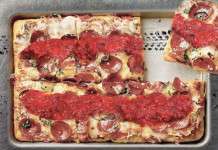