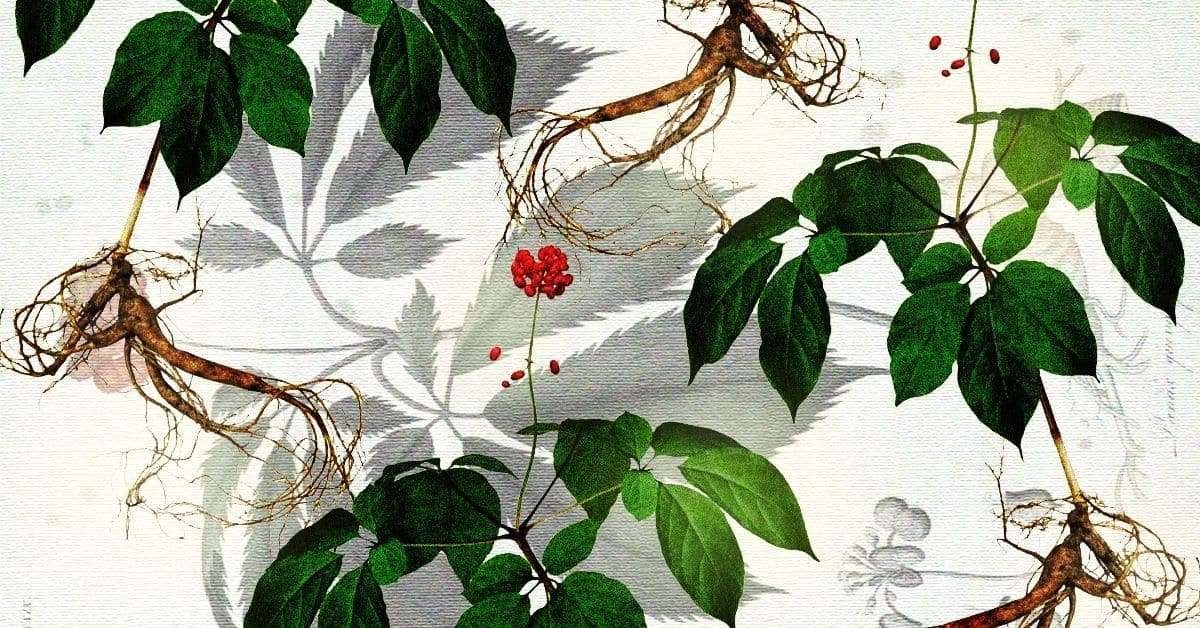 Most people know Wisconsin for its cheese—an aged cheddar in a bright red wax or an absurdly cartoonish cheese block in hat form if you’re a Packers fan. But while the state indeed produces 26% of the nation’s cheese—the most of any state—it’s also the number one producer of the little known culinary and medicinal root ginseng, contributing 95% of commerciallsy grown ginseng in the U.S. and exporting the plant across the globe. Ginseng is so integral to Wisconsin’s history that in 2017, then-governor Scott Walker officially designated the plant as the Wisconsin state herb.

Wisconsin ginseng is a prized product in Asia, often found luxuriously packaged as souvenir gifts on the shelves of duty-free shops in international airports. The name comes from the Chinese word ren-shen, or “in the image of a man,” reflecting the human-like form of the plant’s root.

American ginseng is native to the state and has been cultivated in the region for over a hundred years. In 1904, brothers Walter, Edward, John and Henry Fromm established the first ginseng farm in the state, and soon after, other farmers in the region began to follow in their footsteps. In parallel, demand for Wisconsin ginseng grew, particularly in China.

Before its commercial cultivation, Native Americans used American ginseng to treat a variety of ailments from digestive trouble and bleeding to respiratory conditions and fevers. On the other side of the globe, Asian ginseng has been a prominent herb in traditional Chinese medicine for over 5,000 years. The French Jesuit Father Lafitau discovered American ginseng in 1716 after reading a text on Chinese medicinal plants by another French Jesuit—Father Jartoux—and realizing that the environment where ginseng grows in China is similar to that of Southeastern Canada where he was living at the time. Soon after, Lafitau found a ginseng specimen in the area.

The subtle difference of the climate and environment in Wisconsin, however, produces ginseng with unique characteristics that differentiate it from its Asian counterparts and other kinds of ginseng found in North America. Bob Kaldunski, a grower and president of the Ginseng Board of Wisconsin, said that the alternation of warm summer days and cool nights helps the ginseng respirate and build up sugar, resulting in its distinctive bittersweet taste. In addition, the mineral-rich soils of Wisconsin that were created by glaciation provide ample nutrients and drainage for the plant to thrive. The result is a larger, darker, wrinkled and more elongated root compared to ginseng grown elsewhere.

Kaldunski said that ginseng is a notoriously difficult plant to grow; the root takes about five years to fully mature, and in the interim, changes in weather, inadequate nutrients in the soil and a myriad other factors can destroy a crop, sometimes putting years of hard work to waste. Furthermore, the process requires specialized equipment that often has to be custom-built.

For Kaldunski, though, the patience, precision and expertise required to produce ginseng is part of its appeal.

“That’s just something that intrigued me. It’s a very difficult process to grow ginseng. There’s a lot of art to it—there’s science behind it,” he said. “It’s a crop that will just drive you crazy.”

Consumers prize wild Wisconsin ginseng even more than its cultivated counterparts due to its higher concentration of ginsenosides—the ingredient with medicinal properties. Wild ginseng currently fetches between about $700 to $800 a pound when dried.

Because of its popularity, Wisconsin’s Department of Natural Resources regulates the harvesting of wild ginseng. In the 70s, the plant was listed as an endangered species after being overharvested; now, individuals must obtain a license to harvest the plant.

According to Charmaine Robaidek, conservation biologist and wild ginseng coordinator for the Wisconsin Department of Natural Resources, the number of applicants for harvesting licenses fluctuates by a few hundred each year, with the most recorded demand reaching a little over a thousand.

Despite these regulations, Robaidek said that Wisconsin continues to have issues with illegal harvesting. This includes individuals who steal ginseng from private property and harvest without a license or before season when plants haven’t yet produced seeds. The Department of Natural Resources tasks conservation wardens with enforcing harvesting regulations and curbing this illegal activity.

“All these regulations are there for the purpose of protecting the plant and ensuring sustainable harvest into the future,” Robaidek said. “It’s good for the ecosystem [and] it’s good for harvesters and dealers and consumers. So it might seem like there are all these regulations, but they’re there because it’s a pretty special plant.”

The fact that ginseng has played a significant role in international trade since the inception of the U.S. is a testament to the plant’s importance; the first U.S. international trade vessel carried over thirty tons of American ginseng and sailed from New York Harbor in 1784 with China as its destination. Today, China remains Wisconsin ginseng’s biggest consumer, although the plant is also highly sought after in other Asian markets.

While ginseng has been integral to fostering trans-oceanic ties between Asia and communities in Wisconsin, these connections have not always been stable. Recent trade tensions with China impacted ginseng farmers after China retaliated against the Trump administration’s imposition of new steel and aluminum tariffs by imposing increased tariffs of its own that directly threatened the livelihood of producers.

President of Hsu’s Ginseng Enterprise Will Hsu’s business was among those impacted by the trade war.

Hsu’s father was the first Chinese ginseng producer in Wisconsin. He grew up poor in a subsistence fishing and farming community and immigrated to the state to complete his education. After graduating, he decided to try his luck as a ginseng farmer, even though he knew essentially nothing about the plant or how to cultivate it. His initial endeavors, however, slowly grew into a successful family business. Hsu’s Ginseng Enterprise was officially established in 1974 and is now the largest American ginseng farm for Chinese Americans, according to their website.

The challenges brought about by the trade war, however, spurred the development of products that appeal to a wider demographic as well as a search for new markets outside of China, Hsu said.

Hsu said that Asian communities currently make up the largest domestic market for his business, with about 95% of his client base being ethnic Chinese. Because of the lack of Asian businesses in many parts of the country, the business will likely maintain a loyal customer base among Asian and Asian-American communities in the U.S., Hsu said.

“If you lived in Tulsa, Oklahoma, you didn’t have a Chinatown where you could get this stuff,” he said. “I grew up in Wisconsin; if I wanted tofu, I wasn’t getting it in Wausau. I had to drive to Chicago, maybe Minneapolis, to find a Chinese grocery store or restaurant or distributor that would sell it to me.”

Beginning in the 70s and 80s, Hsu’s father even sent millions of catalogs to Chinese households across the country to reach people who didn’t have access to ginseng and other Asian products locally.

As the target demographic shifts from primarily older people accustomed to the traditions of Chinese medicine to younger people who want more convenience, however, Kaldunski said that growers need to consider changing the kinds of products that they offer.

“Traditionally, older people that use Chinese medicine use the whole root, but the younger group, they want more convenience,” he said.

According to Hsu, making ginseng more convenient for consumers might also help attract non-Asian demographics to ginseng products. Hsu said that while Eastern medicine tends to be preventative, requiring long-term commitment and routine consumption of healthy foods like ginseng, Western medicine is focused more on convenience and treating symptoms. He added that ginseng would be appropriate for Americans to help offset a lifestyle that tends to put stress on the body.

“We drink hard [and] we do a lot of things to our bodies that we probably shouldn’t be doing day in and day out. We take a lot of uppers and downers, whether those be natural or prescribed. That’s just how Americans are medicinally and culturally,” he said. “Asians are much more balanced in terms of their approach to diet and pharmacopoeia.”

Because of differences in habit and culture, Hsu said that ginseng is slow to catch on for many Americans. But, there is some growing interest among some non-Asian demographics, particularly in California, where Hsu sells his products in several Chinatown businesses.

“Ginseng has always had a very healthy connotation to it in American herbal medicine,” Hsu said.

Nevertheless, Kaldunski said the Ginseng Board of Wisconsin is continually looking to educate the public about the herb and its various health benefits.

“We promote Wisconsin ginseng as it is considered the gold standard, one of the premier ginseng in the world,” he said.

A previous version of this story incorrectly spelled the name of the Wausau Daily Herald. This story was updated on November 3, 2022.