Toledo has a long history of roasting and selling coffee. When mass production of coffee in the United States first began, Toledo was at the forefront of the industry on an international level, and locally, coffee was a special part of shopping for many Toledoans. Today, Toledo's rich heritage in coffee production lives on in the image of a lion and through local roasters reviving the tradition. Cover graphic by Ramona Wolff for Midstory.

The best coffee on the islands for many Hawaiian residents comes from a one-pound package with an iconic image: a lion’s head. But here’s the catch – the iconic lion and the coffee it brands trace their heritage not to the tropics, but about 4,400 miles to the northeast in Toledo.

“When I tell people it originated in Ohio in 1864, no one [here] knew that,” James Butler, manager of the Lion Cafe in Honolulu, Hawaii, said.

Prior to 1864, commercial coffee roasting didn’t really exist in the United States. Households would buy raw beans and roast them at home, most often in a cast-iron skillet on a stovetop or over a fire. It was a difficult process, and inexperienced roasters would often be left with bitter and scorched coffee to drink.

C.C. Warren of Toledo began roasting in a friend’s barn (which at one point caught fire during his experimentation process), and in 1864, he trademarked Lion Coffee, leading him to be one of the first to roast coffee at a commercial level and hold one of the oldest trademarks in the U.S.

Woolson was determined to turn Lion Coffee into a household name, and ultimately revolutionized the coffee industry in two ways. First, he introduced the idea of selling roasted coffee in one-pound packages. This streamlined the purchasing process, as selling already roasted and weighed coffee standardized the quality of coffee that customers would receive.

He also introduced the idea of premiums as an incentive to purchase the coffee. Each bag of Lion coffee included a picture card, and customers could cut images of the iconic lion’s head from packages and send them back to the company for prizes. Today, you can still collect the picture cards as postcards, as documented in Sandy and John R. Husman’s “You Will Do Better in Toledo: From Frogtown to Glass City.”

This marketing scheme not only transformed the coffee industry, but the mail service, as well. According to the Husman’s, Woolson vice president N.L. Schmid remembered, “when the incoming mail was so heavy that we had to send our own truck to the post office to pick it up.” Eventually, the company had to weigh the mail they received, rather than counting each individual lion head, a method that the USPS soon adopted for dealing with bulk mail.”

The premiums were popular in part because they included prizes that appealed to people of all backgrounds and ages.

According to “You Will Do Better in Toledo: From Frogtown to Glass City,” Schmid once shared in an interview that the premiums included suitcases, lamps, curtains, bicycles and more, and that “[s]ome individuals who made it their business to go through the country buying the lion heads would deliver as many as 8,000 or 10,000 and in redeeming them would take our entire supply of suitcases.”

The front and back of a Lion Coffee picture card. Images courtesy of Toledo Lucas County Public Library via Ohio Memory.

Lion Coffee was sold all over the country. For several decades in the early 20th century, Woolson supplied almost all of the coffee consumed in the United States, with its only true competitor being the Arbuckle Company of Pittsburgh. When Woolson retired in 1897, the building housed 48 roasters and produced almost 454,000 bags annually.

The combination of convenience and marketing appeal led Lion Coffee and Woolson’s to become immensely popular. The popularity, however, came at a cost — quite literally. Such large-scale marketing and the competitively low price of its coffee made for financial losses that Woolson Spice Company could not sustain; the final strike came with an unsuccessful lawsuit that led to the liquidation of the company in 1919.

Lion Coffee was out of production for decades until Jim Delano obtained the rights to the company in 1979 and the production and assets were moved to Hawaii, where Lion Coffee remains headquartered today.

But for many Toledoans who recall the city’s golden era, memories of downtown will forever be associated with the smell of coffee. One of the best-loved stores downtown, Tiedtke’s, had a specially formatted ventilation system that blew the smell of their in-house brew throughout the store to lure customers in.

Mohn has a special connection to one of Toledo’s favorite coffees: his grandfather was Tiedtke’s in-house buyer of the beans that the store used to make their specialty blends. According to Mohn, his grandfather would go to New York each year to taste coffees, sipping, spitting it out and rinsing his mouth out with water before his next sample — all while taking meticulous notes in a notebook.

Beyond the alluring aroma and carefully selected blends, Tiedtke’s was famous for its branding. According to Mohn, the company knew how to cater to the locals, creating blends like Parkwood, named after a prominent street in the Old West End, a famously wealthy neighborhood for Toledo’s industrial elite.

Tiedtke’s closed its doors in 1972 among a wave of retail closings in downtown Toledo as more of the population — and their dollars — migrated to the suburbs.

Today, even the packaging from Tiedtke’s coffee is considered collectible. Mohn noted that you can still find bags around Toledo in places like antique shops, or being auctioned online on sites like eBay.

In recent years, the Tiedtke’s name has made a comeback, first in 2017 when local resident Bill Klatt picked up the brand and then in 2021 in the form of his newly opened coffee house and roaster under the same name. His shop offers more than a taste of Toledo coffee; customers can find books on Toledo History by local authors and locally branded merchandise, including a hand-carved sculpture of the famous Tiedtke’s Christmas cheese.

Following in Toledo’s coffee-producing tradition, local roasters and coffee shops have popped up across the area — a feat for a city where small businesses have historically struggled to stay open in the post-industrial downtown. Today, within a ten-mile radius of Toledo city limits, a coffee enthusiast can find over 10 local roasters to choose from.

While Toledo may no longer have an international foothold in the coffee industry, its innovation and ingenuity can be seen in coffee production across the globe. And while the iconic Lion’s head may have resettled across the Pacific, local roasters are making sure the nostalgic smell of coffee will linger in Toledo for yet a while longer. 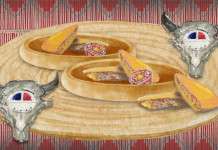