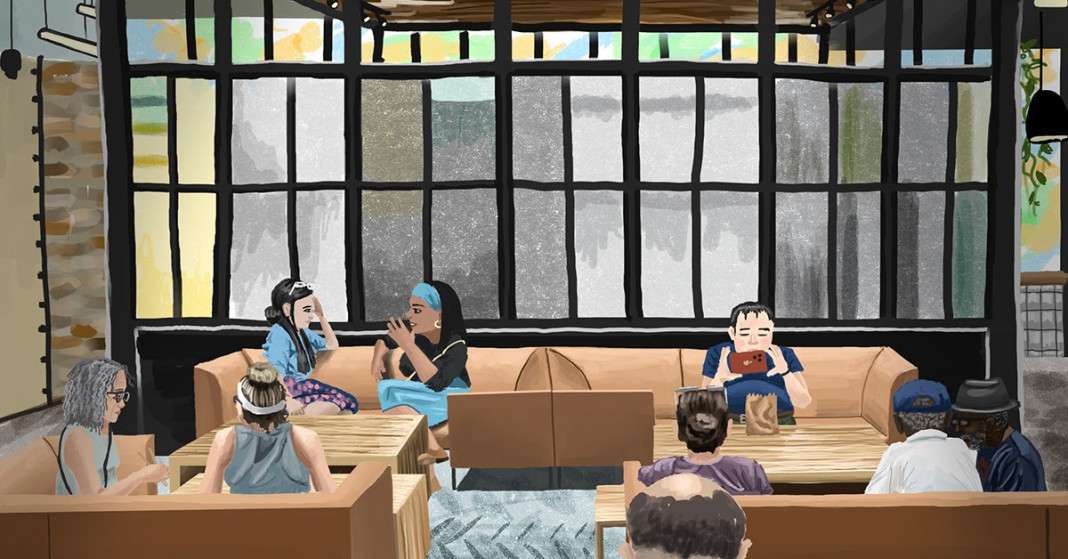 My anti-morning person disposition requires that I have at least one iced coffee to start my day, and while Starbucks or Dunkin suffice, I much prefer to drink my coffee locally. So naturally, I was elated when Rising Star Coffee opened in the new Van Aken District in Shaker Heights—a suburb of Cleveland home to around 27,000 people—a mere five-minute drive from my house.

For those who remember the Van Aken of ten years ago, the new District is unrecognizable; sunny yellow umbrellas on picnic tables in the summer stun against the black-painted bricks of the Market Hall. Inside the multi-use space, there are tables and couches where I enjoy my morning joe with skylights and green vines that add a naturalist touch, and the steady flow of people moving in and out affords me a fascinating look into the daily lives of the other Shaker Heights citizens like me.

A highly historic area (75% of the city is on the National Register of Historic Places), the city has recently struggled with gradual depopulation, following suit with the Cleveland metropolitan area’s longtime trend. The suburb’s population decreased from over 36,000 in 1970 to about 29,400 in 2000 to even less today.

Echoing the stories of post-industrial cities across the region, Shaker Heights has seen its fair share of retail and business districts come and go, like the Larchmere shopping district or Shaker Square, but has never really had a mixed-use, downtown area to call its own. Prior to the new Van Aken, named after the community’s third mayor, William J. Van Aken, Shaker residents would gather amongst themselves at places like Thorton Park or other scattered community spaces, but often without nearby retail or dining.

And that’s what makes the success story of the Van Aken District so compelling; it offers a consolidated, functioning downtown area for Shaker Heights, at a scale and with a holistic vision that make it a model for other, similar-sized suburbs of post-industrial cities like Cleveland.

“There’s no question that this development would just be a development; it wouldn’t really be a special space if it wasn’t for the community” Tania Menesse, the former Director of Economic Development for the City of Shaker Heights and the current CEO and President of Cleveland Neighborhood Progress (CNP), said.

For all the wonderful things about the new Van Aken District, however, the project took almost 15 years of work, hours of planning and millions of dollars since the creation of the Strategic Investment Plan in 2000, made to advise the City of Shaker Heights on how to improve the local quality of living. The plan proposed taking the crowded intersection of Warensville and Chagrin, where the Van Aken District is located, and building a mixed-use village center.

RMS Investment Group, a major property owner in the Van Aken District and the primary developer of the project, needed the City on board. So in 2010, Menesse joined the project.

“When I started in Shaker […], we really needed somebody who was going to help rebuild the business community, and that’s really so much of what laid the groundwork for Van Aken,” Menesse said. “I helped form an economic development plan to create the incentive infrastructure at city council and with the schools that would enable RMS to envision that this could get done [so] they would start to invest time and effort—because at the end of the day this is a private owner that had to decided they wanted to jump in and take on this enormous endeavour.”

According to Joyce Braverman, the Planning Director for the City of Shaker Heights, the goal of the new Van Aken was to create a mixed-use downtown.

“We only have a few commercial areas and Van Aken is one of them, and it was showing its age,” Braverman said. “It was a goal to be more competitive with our neighbors and also to give Shaker residents the amenities that they were looking for gathering, shopping, eating, and so we wanted to do that in a way that was mixed use, and we also wanted it to fit in our neighborhood context. So it was important [to us that] the buildings sit on the street, parking was behind or in garages [and] that the streets meet our neighborhood street pattern and have a lot of connectivity.”

The project’s entire budget was $91 million, including funding from a Tax Increment Financing thanks to a partnership with the schools in Shaker, which agreed to forgo some of their property taxes for the first 15 years to help RMS pay off their debts and a low interest loan from Cuyahoga County that helped build the parking garage.

Braverman said her team wrote numerous grants and raised $19 million for the project, while Menesse added that the City of Shaker itself committed almost $6 million upfront. With significant funds, it came time to lay out the actual development.

“We were involved in early site planning, deciding where the roads go, the road names, where the buildings go, what buildings look like,” Braverman said. “We are very interested in infrastructure planning and working with the electric company and where their lines are going. We worked with Greater Cleveland Regional Transit Authority (RTA) on their facilities, which had to be relocated for the new Tuttle road [and] the development to go in.”

The District is at the terminus of the Van Aken rail line, so the revitalization helped improve transportation options and livability for neighborhoods and employers in Shaker Heights.

The District officially opened in 2019, and the project generated $1.6 million in property taxes and an estimated $577,000 in income tax in 2020 alone, according to Councilman Tres Roeder. Roeder also said that 700 jobs were created and 100 were retained, and that an additional benefit of the District has been the rise of housing values in surrounding areas.

“Real estate agents have told us that there are people coming to Shaker Heights specifically saying ‘I want to be in walking distance of the Van Aken development,’” Roeder said.

Residents particularly appreciate how integrated the development is into the surrounding neighborhoods.

While the District houses a great variety of vendors and shops, the crown jewel of the project has been the participation by and impact on the local community.

“We did six major plans in 16 years, […] there were 61 public meetings, and we had huge attendance at all the meetings,” Braverman said. “The residents really did help us figure out what we should do and what they wanted. So with the planning […] we had great participation.”

And residents and visitors alike are frequenting the development.

“Everytime I walk up there it’s exciting not only to see a lot of Shaker Heights people there, but it’s also pulling a lot of people who aren’t Shaker Heights people and making them aware of our community and it’s making them, in a way, part of our community,” Roeder said. “So we do feel in addition to the economic benefits that it’s lifted morale and provided Shaker Heights a common place where high school students can go and hang out [and] adults of all ages can go and grab a meal or a drink, an ice cream cone, a workout. And that’s been one of the very rewarding benefits of having this development.”

The city is pleased with its success, especially knowing the time, effort and funding the project took.

“We always joke […]  that these are overnight 20-year success stories because people see it and are like, ‘This is so great! Why can’t we do more of this?’” Menesse said. “And it’s like, ‘Well, it took a lot to make.’”

Shaker Heights is historically a relatively well-to-do area, with higher-than-average median income levels and property values. Van Aken, however, falls into the South Woodland Road/Warrensville Center Road neighborhood, which is actually one of the less expensive neighborhoods in Shaker, though real estate prices are on the rise since the opening of the District.

On the border of the city of Cleveland, Shaker Heights has a complex racial history; while a heavily white-majority was fortified by racial restrictions into the 1970s, integration initiatives have helped the city avoid the brunt of white flight seen in similar areas. The percentage of Black residents actually increased about 3% from 2000 to 2019.

The District does, however, have several partnerships with local organizations that help to keep the development accessible to the surrounding populations. The Christ Episcopal Church holds food drives at Van Aken and the Shaker African American Moms group put on a Black History month celebration there this year. Other community gatherings such as movie nights, farmers markets, art fairs, live music and block parties continue the revitalization project’s initial goal of increasing the quality of living in Shaker and strengthening economic growth.

In the future, the Van Aken District plans to build an 18-story apartment building during Phase II of their construction. While a grocery store was originally slated to take up the empty lot on Warrensville and Farnsleigh, the future of that space remains undecided, with suggestions ranging from a park to a commercial development.

Naturally, with Van Aken’s success, some are wondering what other places in Shaker could house similar districts. The Chagrin-Lee corridor is one of them.

“Right now the biggest lot South of Chagrin on Lee Road is where we keep the school buses, so is that the best use of that property, or can we put the buses somewhere else and turn that property into something different?” Roeder said. “What’s the cost-benefit of doing that? That’s an example of some of the questions we are beginning to look into.”

Shaker Square is another longstanding district in Shaker that could use an upgrade. Built in 1929 and is one of the nation’s oldest shopping Districts, Shaker Square is now nearing foreclosure. While it’s technically in the City of Cleveland, because of an agreement made in 1912, the Square and many streets around it are in the Shaker School, Library and Recreation District. While the revitalization of these areas might seem a ways away, Van Aken was perhaps the hardest to imagine of them all when plans first began.

“With Van Aken by the time you got to 2008, 2009 and certainly 2012, there was nothing there; it was a massive parking lot. I think it was hard for people to initially envision what Van Aken could be, while you could more easily envision what Shaker Square could be and many other areas in greater Cleveland,” Menesse said.

While certainly it was the magic of timing, willing partners and enough funding, if Van Aken can succeed, organizations like the CNP are already looking toward revitalizing other areas, especially Shaker Square, toward the overall success of Shaker Heights for years to come.

When asked what their favorite part of the District was, Roeder, Menesse and Braverman were stumped because there’s just so much to love. The coffee may be delicious, but the real treat of Van Aken is the space and the invigorating wash of community life you get more and more of with each returning visit.