The village of Elsie, Michigan has a tradition of dairy farming and the cow statue to prove it. After getting canceled due to COVID-19, their Dairy Festival is back in full force and remains a driving force in the village’s economy, culture and identity. Cover graphic by Sophia-Rose Diodati for Midstory. 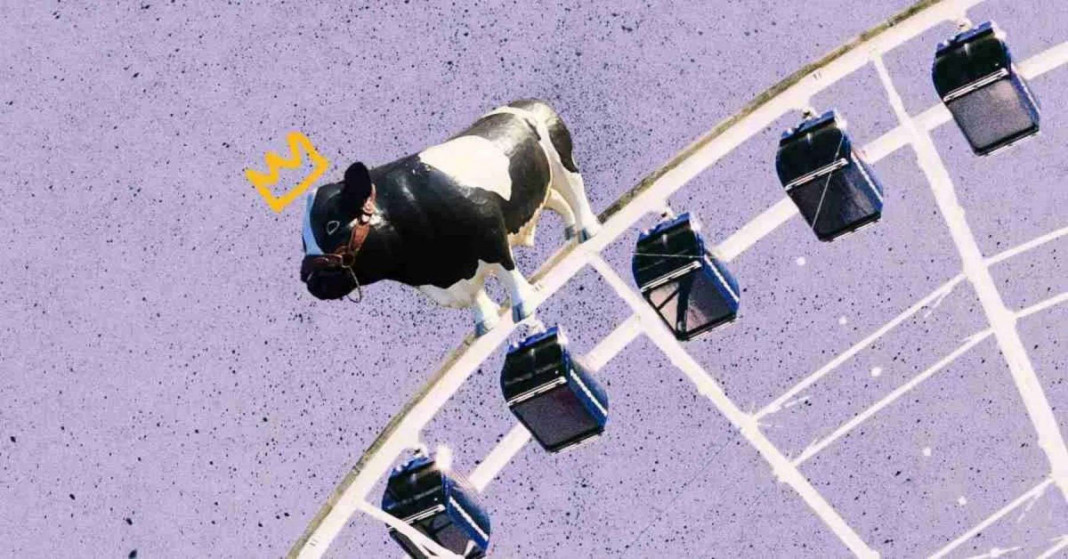 Three years ago on a hot day in early July, I was spray painting small cows and arrows onto the streets of Elsie, Michigan with some friends. We took turns spraying black and white spots onto cow stencils and complaining about the summer weather. We weren’t vandals, but volunteers.

In a few days, those cows and arrows would guide runners on their 5k route across town. The usually quiet streets would fill with people, rides and parade floats.

In the center of it all, a giant cow statue would stand as a proud reminder of why we were there.

The Dairy Festival, Elsie’s celebration of dairy farming, was almost upon us.

Three years ago, 2019, was the last time I attended the festival. In 2020, it was canceled because of COVID-19. It was brought back on a smaller scale in 2021, but I was occupied with work and couldn’t go.

With the festival back and bigger than ever this year, and myself once again unable to attend, I find myself thinking about this tradition and the community that hosts it.

The village of Elsie sits almost directly in the middle of the lower peninsula, though you probably won’t see it on most maps. But if Elsie is known for anything, it would be dairy farming, as the cow population far outnumbers the human population.

Sue Hardaker, Secretary of the Elsie Historical Society and Elsie native, said that the village has had a summer carnival for as long as she can remember. It wasn’t until the early ‘80s, however, that the festival’s theme changed to the village’s greatest export.

Michigan accounts for 5.28% of dairy production in the U.S., and Clinton County — the county in which Elsie resides — has 110 dairy farms, one of the highest counts in Michigan. The dairy industry in and around Elsie serves far more than just the local community.

Agriculture makes up 5.1% of jobs in Elsie, compared to the national average of 1.7%. And since 90% of dairy farms in the U.S. are family-owned, the profits from these farms mainly go to local families.

Dairy farming may be just one piece of Elsie’s economy, but it’s an important one. The Dairy Festival is the village’s way of acknowledging that.

This year’s festival, taking place July 7-9, will have many of the same attractions that I remember fondly: vendors both local and from out of town, carnival rides and games, a parade, and the 5k run called the “Dairy Dash.” There will be a talent show, a 3-on-3 basketball tournament, and even a pet talent show. Green Meadows Farms, the largest dairy farm in Elsie, will celebrate their centennial this year with a tour of their facilities on Saturday, July 9.

Even among all these wondrous attractions, there remains one that surpasses them all. This is where the giant cow statue comes in.

The statue used to belong to a car dealership in Lansing as a part of a gimmick that they were “no bull.” The dealership eventually changed their theme, however, and had a statue they no longer wanted.

The statue was donated to Elsie for the festival. Originally a black Angus bull, white spots were added to make it a Holstein: the kind of cow that can be spotted in many of the fields surrounding the village.

The fact that their iconic “cow” statue is actually a bull is amusing for the locals, as most of them live among enough cows and bulls to know the difference.

The locals aren’t the only ones with an appreciation for the statue, either.

“It’s quite popular because we’ll have motorcycle groups come through Elsie and they all have to stop and have their picture taken in front of the cow,” Hardaker said. “It’s really amusing to us local people.”

The people of Elsie like their cow statue so much that they decided they needed another. There is a smaller cow statue, one that is actually a dairy cow, which is brought out on occasion during parades.

The statue is a constant reminder of Elsie’s identity, one that is heavily based around the importance of dairy farming. And if the cow is a reminder of this identity, then the festival is a celebration of it.

While the return of the festival is certainly a victory, COVID-19 was not the only issue threatening its — and the city’s — longevity.

Organizers expressed initial concerns over the viability of hosting the event this year due to a lack of volunteers. Several positions in the Dairy Festival committee remained unfilled until recently.

“We said, ‘we’re going to have this meeting, make a decision at that meeting whether it’s gonna go on,’” Carolyn Long, president of the committee that organizes the Dairy Festival, said.

Concerns about not bringing in enough workers are understandable. According to the United States Census Bureau, Elsie had a population of 930 as of 2020. Yes, that is 930 people total.

Of course, part of the charm of a small town comes from that close sense of community. It may be something of a cliché to say it, but there is some truth to the identity formed in the type of small town where everybody really does know each other.

For a village like Elsie, too small to be classified as a town, the festival brings needed business to the local shops.

“They have a lot more business because [of] the carnival people,” Long said. “They’re [shopping at] the party store and eating at the pizza place and getting their hair cut. So, you know, they get that extra business, too.”

Fortunately, it seems that the younger residents also recognize the economic and cultural value of the festival.

“I was really surprised we had like 12 or 15 younger people show up to take over different parts of it,” Long said.

I, too, was glad to hear that a younger generation was stepping up to help. I would hate to see a small town festival fall victim to a lack of participation, as I have fond memories of going there with family and friends, from scrambling to collect candy thrown down from parade floats to sampling home-made snacks from enthusiastic vendors.

But the memory I keep coming back to is spray painting those cows in that miserable July heat. As we walked through the streets of Elsie, my friends and I talked, joked and complained about the temperature.

It was the kind of fun you have where you don’t even realize you were enjoying yourself until afterwards.

I no longer live close enough to attend the festival regularly. While it makes me feel a little guilty to think that I am one of those who have left a community that is still struggling to maintain its traditions and its livelihood, I’m comforted to know that there are other young people like myself who are keeping this legacy — and the village — alive.

But I do miss seeing the giant cow.

Facebook
Twitter
Pinterest
Linkedin
Email
Previous articleHow Climate Change is Shaping Michigan’s Coastal Management
Next articleGetting Back on Track: The Outlook for Amtrak in the Midwest