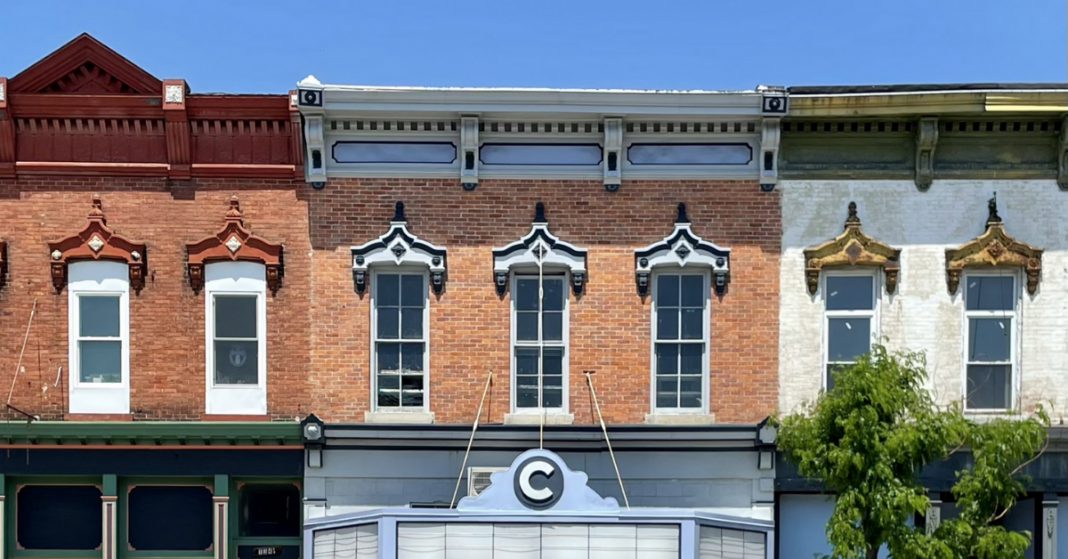 Situated between a Simpsons screencap and a Suez Canal meme, an old picture of a familiar YMCA in Port Huron, Michigan populates my Twitter feed. At first glance, it’s nothing special (and it certainly doesn’t provide the eye-popping draw of other architecture accounts on the social media platform), but it did make me take another, completely different look at a building I’d seen a hundred times. And it’s exactly that off-key allure that made me follow the Twitter account Midwest Modern a year ago amidst pandemic-induced quarantine and travel restrictions; I’m certainly not the only one, as Midwest Modern has now amassed nearly sixty-thousand followers.

The photographs—sometimes archival but often original—showcase everyday and utilitarian buildings you’d find on any street corner, or ones you could drive by without looking twice. The account, devoted to documenting “Architecture, Art, and Design from the American Midwest,” features pictures ranging from Minnesotan teapots to Ohio duplexes to Detroit clocks. Seen in passing, they are unremarkable, but curated and compiled, framed and fitted together, we find them worthy of notice—beautiful, even.

And therein lies the magic. Josh Lipnik, the individual behind the account, photographs, compiles and researches images of structures most of us know nothing about, even as we live next to them our whole lives. His images cause us to not just look twice, but really see these buildings. Eventually we might even recognize them as capital-A “Architecture”—as worthy of recognition as its own tradition.

And, by proxy, we might perhaps see that the Midwest as a whole—as a place—deserves a unique existence, pride and discourse among Midwesterners and those beyond. Among his followers and fellow Midwest architecture enthusiasts, Lipnik describes a “diaspora of people [who] grew up in the Midwest and [moved] to the West Coast, or the East Coast, or even just moved from their hometown to somewhere like Chicago.”

“I think that a lot of people just kind of find it interesting to see places they knew growing up presented in this way,” Lipnik said.

This “diaspora” is growing, continuing the larger 21st-century trend of Midwest out-migration; states like Illinois and Michigan lost 79,487 and 18,240 citizens respectively in 2020. Many of these former residents, although perhaps content to be pursuing careers and lives on the coasts, find an account like Midwest Modern to be reminiscent, or even comforting.

And as the pandemic set in and people canceled vacations and trips home, the account’s popularity grew massively.

“When people were really locked down…I did get a lot of followers,” Lipnik said. “Even if it’s vicariously, they want to feel like they’re getting out of their house and seeing places.”

Before going to a new city, Lipnik attempts to do some research and “have a general history of the place in mind” so that he has a couple of landmarks to visit. But a lot of what we see on his feed comes from just driving around.

Having grown up in the Detroit area, Lipnik became familiar with urban housing on drives simply “trying to find interesting houses.” Years later and with the added experience of an architecture degree from the University of Michigan, Lipnik did find interesting houses around Detroit, but also all across Michigan—including some existing only on the drawing board (or, more accurately, in magazines, vintage catalogues, advertisements and postcards).

In its own way, Midwest Modern also pushes back against the trite and overdone image of Midwestern Rust Belt cities with its curation of communities and structures that are beautiful in their activity and use rather than just in their dilapidation and abandonment—especially for cities like Detroit, whose (in)famous rise and fall in the 20th century made it a prime example of urban decline. These narratives have fed into an obsession with “ruin porn,” where people come into primarily de-industrialized cities and glorify abandoned and run-down buildings that are often out of context and can paint an incomplete portrait of the city, decreasing the visibility and agency of lives still inhabiting and connecting in the community.

Lipnik himself strikes a balance between the aesthetic and the practical; after his education, he also worked for a while in a startup embedded in the Detroit community. In some ways, his interest has always been with the lived and the real rather than the stereotypical image of the Midwest.

“I really try to avoid the typical Detroit stuff of, you know, just ‘Here are all these abandoned buildings,’ and I try to focus on neighborhoods …[and] buildings that are still being reused and are beautiful buildings. I try to give a different view of Detroit than you would typically see,” Lipnik said.

Still, Lipnik posts some nostalgic pieces of defunct architecture, but maybe they’re more about the ways we live around these dated structures—as seems to be the case with this market in Saginaw, MI—that keep our attention. For Lipnik, the story with the most allure is that of reuse and new life, something he hopes to see more of across Midwestern landscapes.

“There’s an old Art Deco electrics—I think it was an electric company warehouse in Detroit—that was converted to supportive housing for homeless people,” Lipnik said. “Having some of these big renovation projects sort of work for the communities they’re in would be what I would like to see.”

Besides reframing architectural structures, there is perhaps also comfort in the regularity and consistency of Small Town, USA, and not just for viewers, but also for Lipnik himself. As he goes out to shoot—usually on the way to another destination for work—there’s a “script” of building types and structure, as well as clear intentionality to counterbalance the nostalgic with the new: the clean lines and pristine shapes of modernist architecture associated with the visions of efficiency, technology and urban interconnectivity of the 1950s and 60s.

“That’s one thing I’ve been trying to do more recently is kind of get at the higher and more well known modernist buildings and then these more everyday vernacular buildings that you can find in almost any town,” he said.

For example, in the space of Midwest Modern’s feed, a luxurious all-white modern house lives next to a rudimentary yellow and green sign for a mulch business, and a church building’s sleek curving roof on a crisp dewy morning is just two posts away from Heck’s liquor store in Saginaw. Intricate facets of the Midwest experience live on the account tweet by tweet, and together paint a balanced picture of the illustrious alongside the mundane.

Whether an expressionist cathedral or a humble ice cream stand, the images on Midwest Modern generally capture a sense of the collective (amazing, given there aren’t many people in his photos…). Besides private homes, most of these Midwestern buildings are for civic use as gathering places for learning, living or meeting up with friends. Beyond beauty, the collective memories attached to many of these buildings—like the Alma church building below—serve to remind people of buildings on the brink of demolition, whose fates lie uncertain in the face of lack of funding and costly repairs.

“I do hope that it can get people outside of the Midwest to maybe look […] and say, ‘Maybe we shouldn’t just forget about all these overlooked places,’” Lipnik said.

For current or former Midwesterners, it’s the rush of recognizing places you grew up around that you may not have given a second glance before now. For outsiders, it’s a glimpse into buildings and artifacts that breathe life into Midwestern cities often derided as homogenous. But either way, with this account, Lipnik said he hopes that followers “will just maybe appreciate wherever it is that they live or see it in a different way.” If the Twitter account’s cult following is any indication, its focus on the irreverent nature of everyday buildings has done just that.