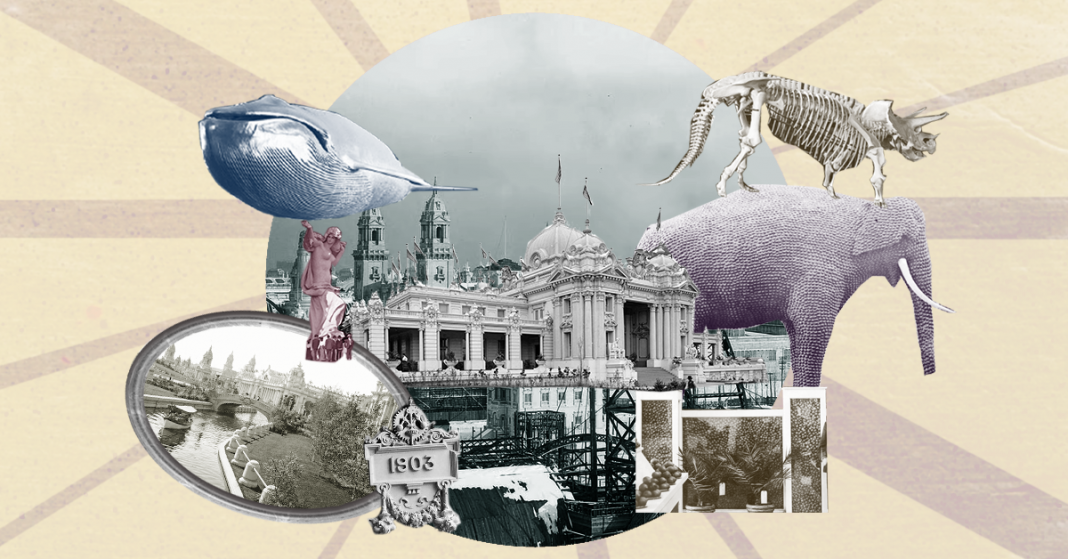 From April to December 1904, visitors toured the St. Louis World’s Fair where sights of whimsy and wonder awaited them. They could stop by a fairy floss machine, gawk at exotic animals or ride a gondola along the lagoon. People far and wide flocked to the fair, where world records, new ideas and recent inventions debuted. 1200 acres of eye candy boasted the nation’s achievements to not only the American public, but foreign dignitaries. Among the visitors were also iconic figures like Helen Keller, Thomas Edison and Theodore Roosevelt.

The fair punctuated the Gilded Age and was the last exposition of its sort before World War I. Held to celebrate the anniversary of the Louisiana Purchase (which included parts of Missouri), it was the largest and most expensive world fair the nation had ever seen. Erected especially for the exposition, 1500 elaborate structures adorned Missouri’s Forest Park, turning it into a carnival, food court, amusement park, mall and museum all at once. In a couple of months, everything would be dismantled, leaving nothing but a fantasy in the minds of its 20 million visitors.

International expositions like this had previously been held in glamorous cities like New York, San Francisco, and Paris, leaving behind relics like the Space Needle and Eiffel Tower. The Columbian Exposition of 1893, however, was held in a fellow Midwestern city, Chicago. Long derided as a dirty industrial center devoid of aesthetic charm, hosting the exposition was an opportunity for Chicago to dress itself up and did wonders for its reputation.

The St. Louis World’s Fair drew inspiration from the Chicago fair in designing its own extravaganza. At the time, St. Louis was in the top five largest cities in the United States, and hosted not only the Fair but also the Olympic Games in 1904 (an honor Chicago had been vying for).

Much like the Columbian Exposition, the St. Louis World’s Fair demonstrated the potential of Midwestern cities to reinvent themselves at the turn of the century into places of sophistication, culture and possibility. While the fair represented the country as a whole, it was also a testament to the glory and national relevance of its host city.

Here are some of the fair’s most memorable showcases:

The first Ferris wheel debuted at the World’s Fair of 1893 in Chicago and was built to rival the Eiffel Tower. It was this same Ferris wheel that was transported to St. Louis to be used for the World’s Fair of 1903. It had 36 cars which could carry 60 passengers each, compared to the more intimate compartments of today’s Ferris wheels. Some passengers held dinner parties in their car while one couple even got married during their ride. In 1906, the original Ferris wheel was demolished, but today its remakes are widely enjoyed at festivals and amusement parks.

Ushering in a new scientific era, electricity made the fair come alive. It powered fountains, signs and the Ferris Wheel, while electric lighting illuminated and beautified the fairground buildings, reflecting in the lagoon at night. This was one of the first uses of outdoor electric lighting; people at the time were accustomed to gas and oil lamps. Electricity also ran a number of inventions that debuted there, such as the electric typewriter, the plug with wall outlet and the electric dumbwaiter. As one of several “palaces” dedicated to technological advancements, the Palace of Electricity featured exhibits where fair-goers could tinker with these inventions and foreshadowed the role electricity would play in powering the modern world.

The story goes that Ernest A. Hamwi, a Syrian immigrant, was running a concession stand for a waffle-like pastry at the fair. When the ice cream vendor beside him ran out of cups, Hamwi rolled his waffles to hold scoops of ice cream for customers. Ice cream cone businesses soon cropped up across Missouri. To this day, the ice cream cone is the state’s official dessert. While the invention of the ice cream cone predates 1904, the fair certainly popularized them, alongside American classics like the hot dog, peanut butter, cotton candy, iced tea, Jell-O and Dr. Pepper.

Unlike the ice cream cone, puffed rice did indeed debut at the fair. Working with Quaker Oats, Dr. Alexander Anderson set up a demonstration in the “Palace of Agriculture” of a technique he had devised to puff grains. He used his cannon-like puffing gun to shoot puffed rice. It showered the audience while assistants bagged it for sale. Today puffed grains are found in Rice Krispies, Cheetos and breakfast cereals like Cheerios. Not too far away were exhibits on food safety (the Pure Food and Drug Act would be passed in 1906). The Palace of Agriculture also featured obscure fruits and pyramids of produce that attested to America’s prosperity.

At the beginning of the 20th century, wireless telegraphy was quickly gaining traction, allowing messages to be sent across miles without wires. The fair presented a chance for visitors to witness the new technology in action. The DeForest Wireless Telegraphy Company set up seven telegraph stations and one observation tower over the fairgrounds. Visitors could ride to the top of the tower, watch the operator send messages, and even try it out for themselves. Local newspapers received daily updates about the fair’s going-ons from this tower. As popular as the wireless telegraphy exhibit was, crowds also marveled at the radiophone, or wireless telephone, invented by Alexander Graham Bell. Along with the telautograph (an early analog fax machine), these technologies were precursors to devices like the radio and cellphone, which would revolutionize communication.

The fair also put people on display — not only in freak shows but in extensive “living anthropology” exhibits. Controversial today, these exhibits were used to promote racist theories and justify American imperialism, particularly in the Philippines. 1200 Filipinos were brought in from abroad for the fair’s largest exhibit, which had been suggested by the U.S. Secretary of War. Newspapers emphasized their savagery and facilitated rumors that the villagers hunted dogs. Native Americans were also on display, including the famous Apache chief, Geronimo. Meanwhile, attractions like “Mysterious Asia” catered to American orientalist fantasies.

By no means is this a comprehensive list. The fair also presented medical advancements like the X-ray machine and baby incubator and appliances like the tabletop stove and coffeemaker. New modes of transportation were on display, such as airships and the private automobile.

When the fair was over, leftover buildings prompted city projects: locals protested to keep the aviary, which became the cornerstone of the St. Louis Zoo, while the Palace of Fine Arts became the city’s art museum.

But its legacy left behind more than just physical infrastructure. For the eight months that the fair ran, the city of St. Louis became a site on which America’s pride and grandiose visions were projected — for better and for worse.

At the fair, displays of modernity went hand in hand with monuments to colonialism and imperialism. This played out at home in the city: “St. Louis was a deeply segregated city…This was a fair where those attending were principally white,” Peter Kastor, a professor from Washington University, explained in a podcast for Kansas City NPR.

And true to its name, the World’s Fair had implications on a global scale, as well; it was “a microcosm whose miniaturization not only affirmed the new unity of the globe but also made possible its consumption,” Tom Gunning writes in his article “The world as object lesson.” It epitomized an increasingly globalized world; a ticket to the fair came with trips to foreign lands and tours of innovations that were closing distances between people. In the following decade, World War I and America’s imperial ventures would make the world beyond the nation’s borders increasingly relevant.

In 1904, St. Louis was a temporary host for the future of America — but what future, and for whom? In showing off the nation, international expositions filtered and shaped the idea of America, using curation to make judgments on what was worth flaunting. Exhibitions elevated the image of the nation but also evoked a sense of hierarchy: in promoting the “progressive,” they sometimes made spectacles out of the “backwards.” As much as our lives are better for the inventions showcased that year in St. Louis, those 20 million visitors saw a future not as it was destined to be, but as curators desired it to be.