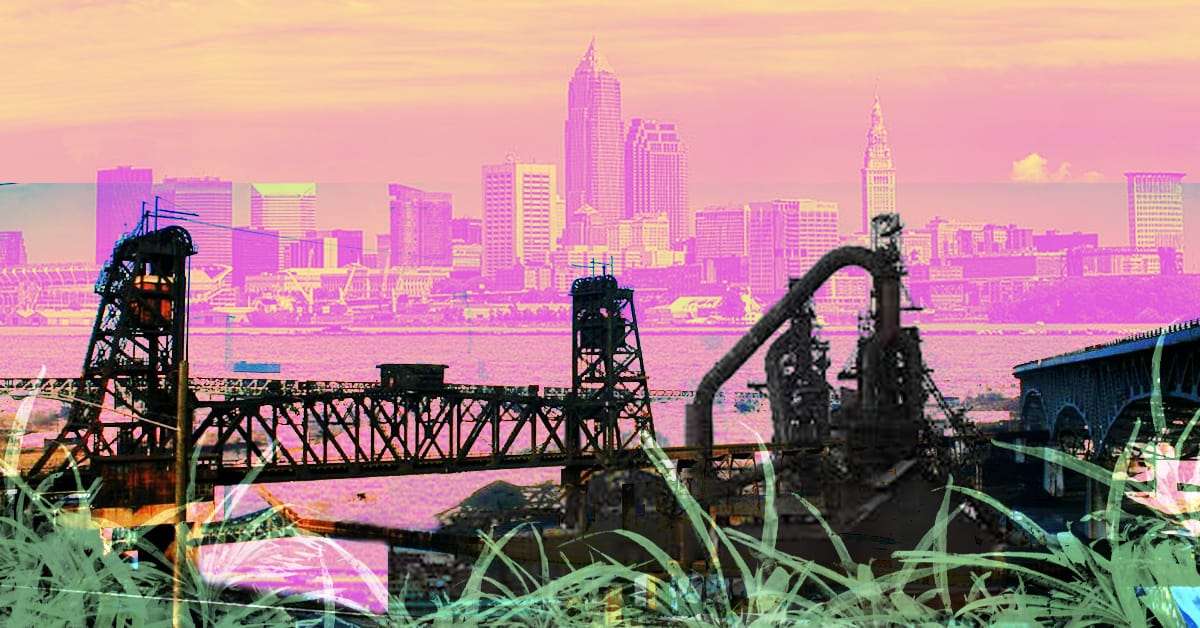 On July 2, it was cloudy in New York City. The city’s official Twitter account, which has over 1 million followers, commented on the weather by tweeting a picture of the overcast skyline, captioned, “A gloomy day in New York City is still better than a sunny day in Cleveland.”

Low blow aside, Cleveland indeed seems to be seeing sunnier days—and Clevelanders were quick to rebut the Tweet—as the city has undergone its own metamorphosis in recent years, a source of pride for the city’s residents and of hope for inhabitants of post-industrial cities across the Midwest.

Cleveland embodies a story familiar to the Rust Belt: a city which flourished during the peak years of American manufacturing, but suffered a large decline as industry shifted overseas. Granted, it’s not short of abandoned steel mills, vacant infrastructure and run-down homes, and some of its history (the river caught on fire how many times?) remains prominent in the public consciousness. The city’s past has made it an easy punchline not just for New York City’s twitter account, but also among others in the Midwest and Ohio, and even Cleveland’s own residents.

But despite its run-down reputation, the city also boasts new signs of life and revitalization. In the past year, it has had an increase in property value and number of employers. Its strongly Democratic voter base in an increasingly red state makes Cleveland a powerful tool in Ohio politics. While the median household income is lower than similar cities, it is steadily rising. Some Cleveland neighborhoods, like Ohio City, have seen impressive growth, especially among young people and people of color.

Although Cleveland is not without its own remaining challenges, new local efforts have turned it from a crumbling town to a road map for other Midwestern cities still seeking the internal spark necessary to rebuild in a post-industrial world.

Shortly after the Revolutionary War, Connecticut staked its claim to a swath of land located in the newly established Ohio Territory, which came to be known as the Connecticut Western Reserve. Settler and investor Moses Cleaveland arrived to survey the land in 1796 and ultimately gave the city its name, although  it was later shortened to Cleveland in 1831 in order to make it fit on a newspaper header for the Cleveland Advertiser.

In its early days, the settlement remained relatively small and isolated from the larger national network of trade and travel. The construction and opening of the Erie Canal was a critical turning point for Cleveland and many other Rust Belt cities, as their locations along the Great Lakes led them to become prominent industrial production centers and trading points. Between 1850 and 1860, the population of Cleveland rose from roughly 17,000 to over 40,000.

In 1870, John D. Rockefeller founded Standard Oil Co. in the city. Nearby sources of coal and iron ore also made Cleveland an appealing base for industrial plants, which continued to open and grow through the late 1800s and into the 20th century alongside the city’s steel and iron mills. Diverse industries continued to arrive in Cleveland; the Sherwin and Williams paint company was founded in the city, electric and chemical companies opened Cleveland plants and the auto industry began manufacturing in the region.

The expansive number of manufacturers and industries operating in the city combined with its convenient location along Lake Erie created a flourishing hub of manufacturing and trade which only continued to grow throughout several decades. Alongside industrial growth, Cleveland served as center stage for national politics, with the Republican party holding its national conventions in Cleveland in both 1924 and 1936.

Bolstered by the manufacturing boom of World War II, by the 1940s the city was a thriving metropolis, with a large, diverse population, an expansive job market and industrial economy, and a lively social scene. The Cleveland Indians won the World Series in 1948, and the city received the All-America City Award for the first time in 1949. Just four years after being established, the Cleveland Browns won the NFL title in 1950.
The bounty of jobs in manufacturing and industry combined with the city’s extensive cultural capital allowed it to continue its exponential population growth through the early 1900s. In 1950, the population of Cleveland reached 914,808 people, making it the seventh largest city in the U.S. at the time.

But as the demand for industry declined, many Cleveland manufacturing plants closed, laid off large numbers of employees, and moved to other states, particularly in the South. In 1966, the atmosphere of the city grew more tense after the 1966 Hough neighborhood riots, incited  one July night after a white bar owner refused to serve a Black customer a glass of water. The incident led to six days of vandalism and looting within largely Black neighborhoods.

The relationship between white and Black citizens of Cleveland had already become strained in the past several decades, after the city’s demographics shifted during the 1950s to make Black citizens the majority. But despite Black Clevelanders being the majority, they still faced discrimination in housing and often met with hostility from local business owners, police officers and regular citizens. In the wake of these economic and social changes, people began to flee the city in larger numbers, leaving behind a sleepy and occasionally unsafe downtown area.

One of the lowest points for the city occurred in 1969, when the Cuyahoga River, heavily polluted with industrial waste, caught on fire multiple times. It was one in a series of historical river fires and, drawing both regional and national attention to the dangers of pollution, partially inspired the federal Environmental Policy Act to be signed into law in 1970.

Even as the city experienced a general decline, however, signs of life and revitalization still remained. The Northeast Ohio Regional Sewer District put over $3.5 billion towards cleaning up the Cuyahoga River, and the city still upkeeps yearly waste management programs to keep the river and surrounding environment clean. Much of the downtown area has been rebuilt in the past half-century, with two new skyscrapers added to the cityscape in the ‘80s and ‘90s.

A central part of Cleveland’s rebuilding efforts has been the Downtown Cleveland Alliance (DCA), established in the early 2000s with a stated mission “to attract people, jobs, and investment into downtown Cleveland,” according to Michael Deemer, the Executive Vice President of Business Development for DCA. Along with city leaders, the DCA has played an integral role in city planning and organization of the rebuild.

As the Great Recession began, Cleveland and its community continued to work to rebuild the city, establishing infrastructures and resources which are just recently beginning to boom and come to light as the city’s population grows.

“The recession hit Cleveland exceptionally hard,” Deer said. “But I think it is a time period in which the city really pulled together to invest in itself and plan for the future.”

In the past several years, Cleveland has once again experienced a sort of boom, with the Cleveland Cavaliers winning the NBA championship in 2016, and the city serving as host for the 2016 Republican National Convention and the site of the first debate of the 2020 presidential election. All of this attention has brought a unique city back into the national spotlight, allowing city leaders and franchises to show off their successful rebuilding effort in hopes of drawing further interest to the city at a pivotal moment in its history.

The city has particularly focused on targeting investment in a younger and larger downtown population and new forms of industry and job markets. Northeast Ohio has the second highest concentration of corporation headquarter jobs outside of the Minneapolis-St. Paul region. Pivoting from its traditional industrial identity, Cleveland now emphasizes emphasize health care and knowledge industries. The renowned Cleveland Clinic is a major employer of 20 percent of the city’s population and is one of the top-ranked hospitals in the nation. The city is also attracting company offices,, including a new Sherwin Williams headquarters announced earlier this year. The city is also seeing a renewed social and art scene, with renowned local restaurants, the Cleveland Museum of Art and the Cleveland opera providing entertainment and recreation.

What remains to be seen is how Cleveland will leverage its current status as a place of national curiosity in order to continue its successful rebuild. Although Cleveland has slowly regenerated a more positive, appealing image, there is still much work to be done in reversing an ongoing, decades-long decline in population.

Deemer remarked on the somewhat unique nature of Cleveland, which combines the culture and opportunities of a large urban area, with the space and affordability of a smaller town. The world-class resources and opportunities that the city has developed, coupled with its affordability and low density of population make Cleveland a novel and appealing living environment, and also indicate a potential path to regrowth and revitalization for similarly positioned Midwestern cities.

“The best thing we have to offer is an incredibly high quality of life that is exceptionally affordable,” Deemer said. “In particular compared to the coasts. I think that in Cleveland you can live a life where you enjoy really world class big city amenities, whether that’s arts and culture, food, music, history (or) green space. We have all of that, and it’s simply much more affordable to live here and enjoy all those things or to have and operate a business here. I think that represents a big opportunity for Cleveland and a big opportunity for the Great Lakes region.” 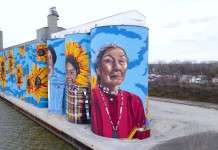