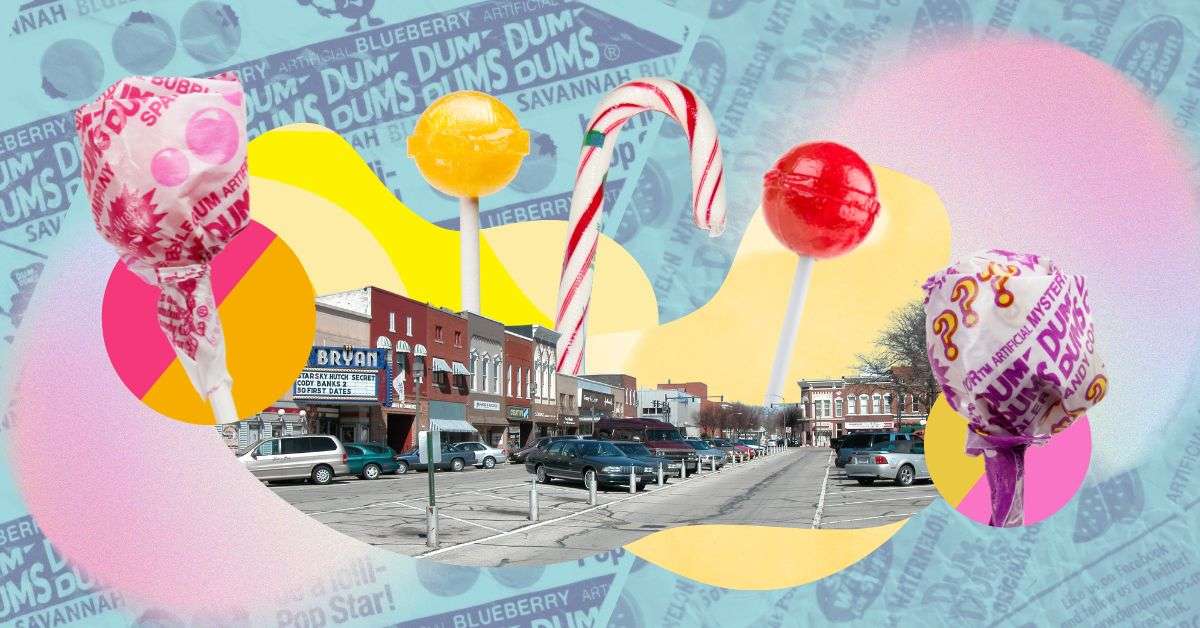 They’re everywhere – wrapped neatly in your childhood Halloween baskets, stuffed into little glass jars on bank counters and dropped into cellophane bags at your local convenience store. From butterscotch to sour apple, Dum Dum lollipops have become an American candy staple since their conception in 1924.

If you’re ever driving through Ohio, however, you might also find eight of them standing 65 feet tall, welcoming you to the humble city of Bryan, Ohio. In early July, Spangler announced plans to redesign Bryan’s water tower in collaboration with Bryan Municipal Utilities. The new tower, painted by supersize muralist Eric Henn, will feature the tower legs as lollipop sticks.

If the size of the lollipops is an indicator of the candy’s influence on the city, the mural is arguably true-to-life. Like many nationally-recognized brands, Spangler Candy Company finds home in the small-town Midwest — in Bryan. There, like a Midwestern Wonka factory, Spangler pumps out roughly 12 million Dum Dums per day.

“The company’s impact is what we call Bryan’s ‘claim to fame’ here,” Jared Schnee of the Local History & Genealogy Center at the Williams County Public Library said. “Everyone knows that Bryan makes candy. And sometimes on the right, perfect day, you can catch the smell of candy throughout town.”

In late 2011, Dums Dums became the number one lollipop in America, according to IRI scan data. But Spangler produces more than just Dum Dums. The brand can also be credited as the largest U.S. candy cane manufacturer, as well as the owner of Necco Wafers, Sweethearts, Canada Mints and Bit-O-Honey.

Schnee, a native Ohioan, said his grandfather grew up adjacent to the Akron factory in Bellevue.

“When my grandpa was a kid he would always sneak out back behind the factory with his buddies, and they would just have big globs of unused candy,” Schnee said. “It would just kind of all harden into one big gloop, and him and his buddies would chisel out little parts of the candy and take it home.”

Spangler’s roots extend to other areas of Ohio and the Midwest, too, including a former distributorship location in Toledo. But perhaps its greatest influence is within Bryan itself. While many small towns across the Midwest struggle with depopulation, Bryan’s population has increased slowly but steadily over the past few decades. Schnee attributes some of that success to Spangler’s presence.

The city of Bryan and the Spangler Candy Company have grown up side by side. When the company arrived in Bryan in 1906, the city’s population was hovering just above 3,000 residents. Today, Bryan boasts a population of just over 8,600 and is currently growing at a rate of 0.21 percent annually. From reaching the milestone of $50,000 within the early years after its initial founding, over a century later, Spangler’s revenue now surpasses $120 million as of 2018.

Bryan’s largest industry remains in manufacturing, clocking in at 26.5% of the city’s total employment. As of 2016, Spangler Candy Company was Bryan’s second largest employer with over 480 employees.

According to Schnee, Spangler has established a visible presence in Bryan, implementing recognizable features of the company throughout the town even before the proposed water tower redesign.

For example, a mural of the Dum Dum Drum Man mascot embellishes a wall near the factory grounds. Spangler also plans to open a new museum and store on downtown’s South Main Street called Spangler Candy World, which will include a 360-degree virtual tour of the factory. The company also established the Spangler Foundation back in 2005, providing community funds and scholarships for local area students.

But even with all these attractions, it’s the sweet aroma of candy that seems to remain in people’s minds. Before working at the Local History & Genealogy Center, Schnee delivered pizzas and would regularly receive orders from workers at the Spangler factory.

“Immediately right when I would walk in for the delivery there, I’d just be overwhelmed with the smell,” he said. “It was just such a nice feeling.”