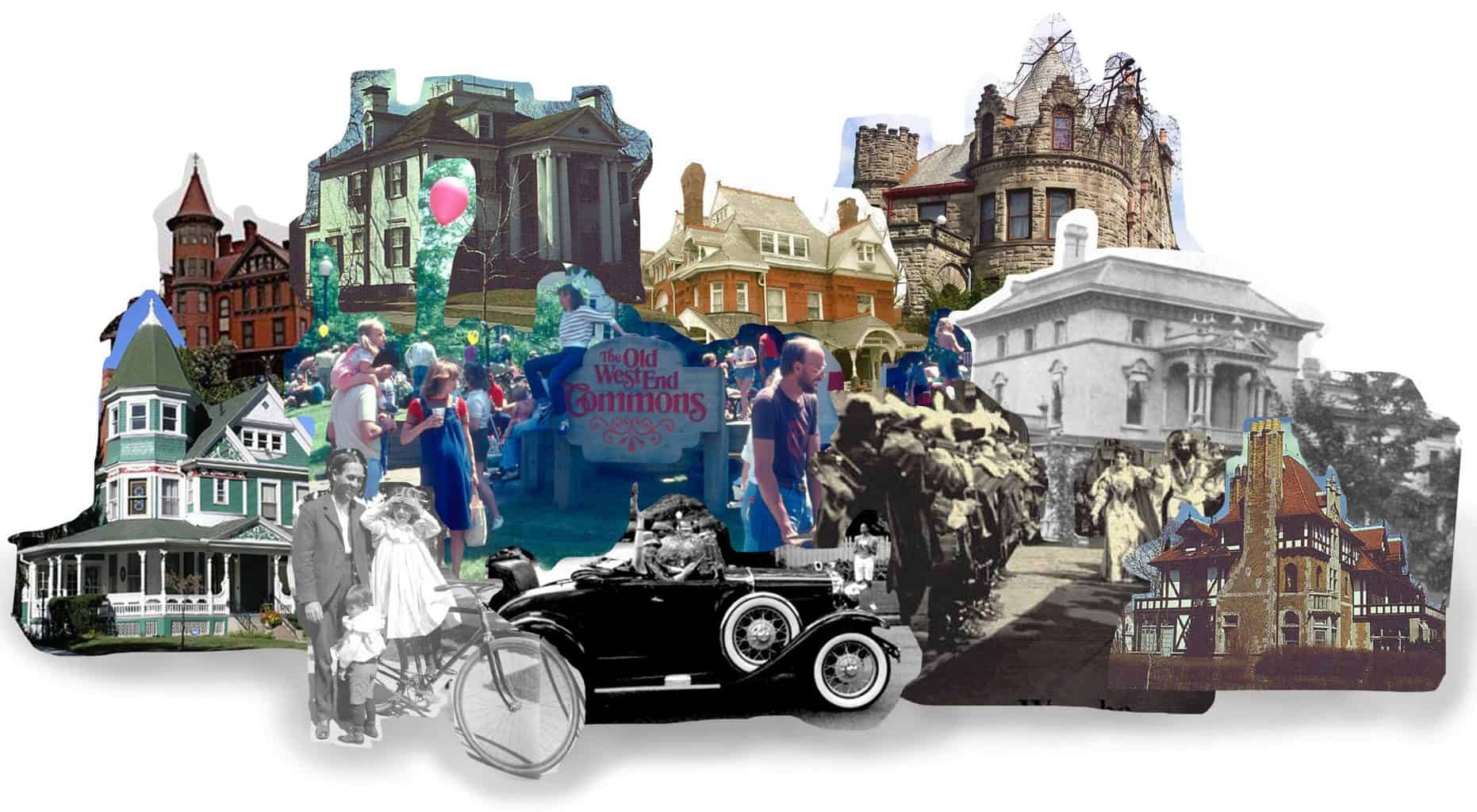 A childhood friend’s mother recently told me that she would eavesdrop on us playing with Barbie dolls and that our narratives were typically tinted with historical subplots, like the time Barbie and Ken were a Civil War era couple bidding their final farewells to one another or when Theresa had to ration her food because of the Great Depression. It’s these recollections that solidify my belief that I am an old person in a young person’s body—not in the context of heel spurs or osteoarthritis, but in context of my lifelong passion for history and for living vicariously through it. While growing up in Toledo might not seem all that conducive to a passion for living history, the city’s ongoing revitalization has unveiled previously hidden or ignored sources of living history—ones that go beyond role playing or reenactments to penetrate into our daily lives.

Cities like Boston or Philadelphia pride themselves on historic preservation and value, with history buffs flocking in waves to experience famous buildings and objects first-hand—and understandably so. It’s easy to picture 17th-century America when people role play in full period garb and speak to you on site in Olde English, pretending to not know what a camera is, which is what one would find in Plymouth, MA or at George Washington’s Mount Vernon. These places, otherwise known as “tourist traps,” use immersive strategies to make it easy for non-history enthusiasts to enjoy themselves and to, at the very minimum, consider what the given site was like in its day—and might even lead them to purchase an authentic lunch of porridge and johnny cakes.

This brings me back to the Barbie games I played as a child. Role playing is undeniably an effective strategy in terms of bringing history to real time and fostering a sense of connectedness to a certain point in the past. Those historic guides make it easy for people to learn history at the right place and at the right time. When you’re standing in Thomas Jefferson’s personal library and a guide tells you that he went bankrupt buying books, or when you’re standing in James Madison’s backyard and a guide tells you that his slaves managed the gardens, you simply memorize facts and therefore propagate fewer meaningful connections to that piece of history’s narrative. Immersion in a designated site loses its magic as soon as you walk out of the doors. You forget that Jefferson probably laughed over his favorite works of political satire in that library, or that Madison drew inspiration from the beauty of the Blue Ridge mountains, which his garden overlooks, when drafting some of the United States’ most important founding documents. Those takeaways that go beyond the “site” are arguably the most critical in weaving together the fabric of the past, in giving our history human relevance.

In the city of Toledo and its surrounding areas, our history is rich but hardly appreciated enough to attract tourists in this way. I think this is because it appears that we lack the immersive resources other regions have available at their disposal, but conversely, we have the opposite issue; we are living in Toledo’s history. We are fully immersed in our home’s historical significance; it’s manifested in our daily lives to a point we possibly aren’t even aware of.

A prime example: all of this used to be a swamp. That’s right—all of “this” was a swamp. We walk on that swamp. Our children draw chalk art on that swamp. The problem is that it was not until after our historic essentials—Fort Meigs, the Battle of Fallen Timbers, etc.—had their defining moments in history that the swamp was cleared out and excavated by developers who wanted to implement a better agricultural and transit systems. In other words, all the tangible, historical significance—battlegrounds, halls where negotiations were made, or the homes of our founders—was essentially wiped out because the swamp was. Fort Meigs? Currently embedded within residential property. Fallen Timbers? Now a shopping mall. You can understand how it could be difficult to imagine General Anthony Wayne duking it out with Little Turtle just outside a Dillard’s, and it would most definitely make it challenging for a historical guide to paint that picture accurately to a crowd of history buffs.

How, then, does Toledo’s own history find its way into our everyday lives, interacting in ways we may not even be entirely aware of?

While the examples I mentioned are now contextless, relegated to history lessons taught only by watching reenactments scheduled every other Saturday afternoon, here is a major historic gem that retains an original context all its own: downtown Toledo’s Old West End. The Old West End is the largest neighborhood of late Victorian, Edwardian, and Arts & Crafts homes east of the Mississippi, and aside from its distinct architecture, the neighborhood is also known for its annual Old West End Festival and its tight-knit community of residents. Left to its own evolution, without guides or people telling us how to understand or appreciate the Old West End, it is often overlooked or dismissed. That it was (and perhaps still is) underappreciated speaks to its particular history, and how this history allowed it to escape that hackneyed characterization of “historical” to become historically significant in our daily life.

Here, history is not just learned, but tangible and palpable. Despite its tangibility and authenticity, however, I don’t think people see the Old West End as “historic” in the same sense as places like the Walcott House because of its scale and modern use. As opposed to one house where you can go and dip candles or walk through a cellar, the Old West End stretches over 25 blocks, and while not all is recognized as “historic” by the National Register of Historic Places, residents put the homes to use for their modern life. Walk into any home and you’ll find some indication that a 21st-century human being lives there, and there’s something beautiful to that. Its adaptability to modern life undermines the magnitude with which it has shaped our city, in other words, its historical significance. Because of that, declaring that the Old West End is historic does not help us grasp the idea that the Old West End is our most historically significant relic; I think it complicates that notion.

The Rise, Fall, and Renaissance of the Old West End

The Old West End’s history is, however, not entirely glorious; its distinguished beginnings in Toledo’s nascent days were short-lived, giving way to modernity and left to devalue for the greater part of the twentieth century. At the turn of the century, however, the neighborhood began its gradual facelift, property by property renovated to be fit for modern existence—and perhaps it’s that long dormancy, during which it was was largely ignored by most, that allowed it to remain a useful part of our present today—becoming a vibrant, lively, contemporary piece of history today.

The “woods” district, as it was known in the early days, was platted in the 1870s on family land owned by Toledo pioneer Jessup Scott. Initially, families of prominence in the Toledo area developed homes in the neighborhood, with businesses and churches soon jumping on the bandwagon. The Old West End’s peak popularity was between 1875 and 1915. At the turn of the century, the Old West End established itself as the hottest destination for Toledo emigrants, expanding so far that Tremainsville, an old town, was entirely dissolved into the neighborhood by the 1920s. At that point, the neighborhood’s marketability significantly dropped. The introduction of the automobile gave locals—unimpressed by what they now considered to be outdated homes—a feasible mean to seek residence in neighborhoods farther away from downtown, so many left the Old West End, while simultaneously, few emigrated to it. A somewhat steady decline in desirability plummeted in the 1960s when the construction of the interstate highways demolished entire blocks and essentially all hopes for residential expansion.

In 1973, despite its dramatic, multi-decade long devaluation and the continuing depopulation of the entire city from the ‘70s onward, part of the Old West End was placed on the National Register of Historic Places as an Historic District, which commenced a huge expansion process in 1984. Since then, the neighborhood has undergone major restoration projects and rises in property value.

I have only seen this neighborhood in its remarkable revival, its chance to recover its glorious beginnings not just as a museum site, but as what it was originally intended to be: magnificent architecture that’s lived-in and loved. Driving past these historic homes always gave me the warm and fuzzies growing up. I would envision what it was like to exist amongst beautiful, mahogany staircases and the smell of old wood while the neighborhoods around me were blooming into urban centers. I’ve always thought the stasis of classic Victorian architecture over decades of drastic changes in style and culture, as well as infrastructural development, was hopelessly romantic. Lots to contemplate for a little kid playing with Barbies, right?

Unlike other historic epicenters, the Old West End does not offer a guidebook on how to see it. There is no clear demarcation between audience and actors, off-limits back-of-house and public refreshment area. It is the responsibility of its residents and community to conduct their lives in the direction they want others to realize as the moral purpose of that role play. Every June, all walks of life gather for the Old West End Festival, which features live entertainment, an art fair, and, a pinnacle of the neighborhood’s cultural legacy, house tours around the Historic District. Embodying the diverse, eclectic residential community is the coronation of King Wamba & Queen Sancha, a crowning of outstanding community members which kicks off a grand parade. The parade itself is a spectacle, drawing in a procession of vehicles decorated with anything from lawn flamingos to the heads of baby dolls. As a child, you can imagine how thrilling the festival was, and I revert to that same level of giddiness every year. In honoring and celebrating the Old West End’s history, the community gathers to live in the present moment rather than replaying moments of the past.

In a region like Northwest Ohio, we generally lack cities that boast pockets or boroughs with a defined culture that attracts crowds. Only in the Old West End can you grab coffee in a mason jar, see a show at the theater and then go antiquing all within a few blocks. Here, you have to be imaginative, open minded, ready for an off-the-beaten-path adventure, and most importantly, you also have to celebrate the manifestation of history in real time.