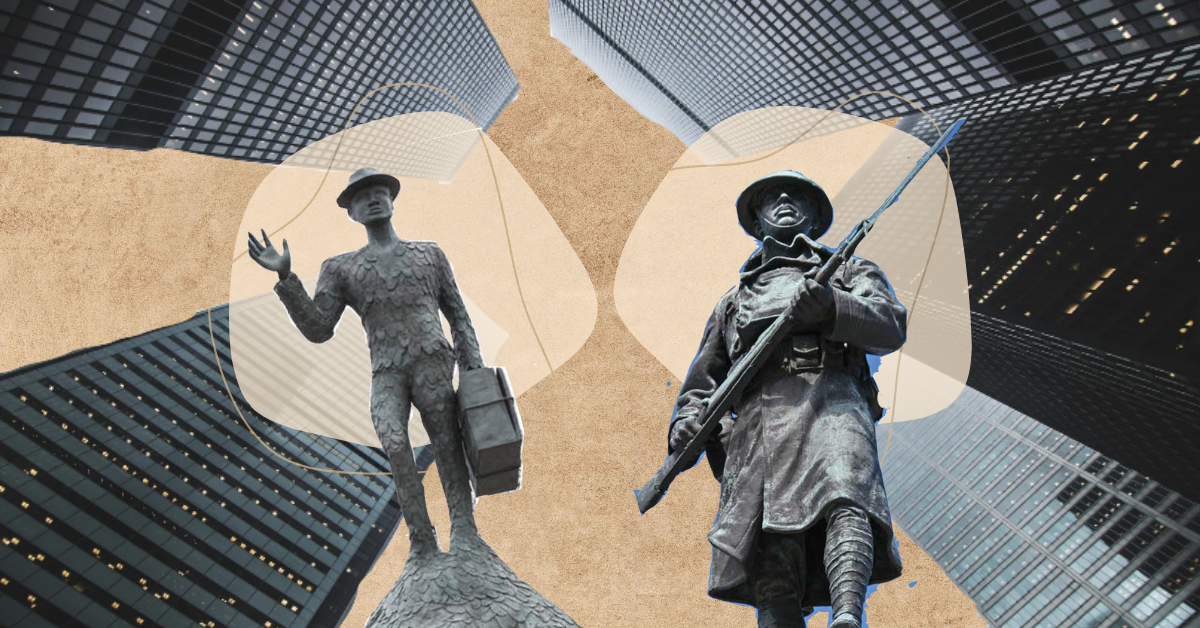 If the walls of Chicago’s Michael Reese Hospital could talk, they’d beg for purpose: August 31st will mark the medical center’s 13th year of vacancy. This, obviously, was not the plan. When the South Side hospital officially closed its doors in 2009, the city bought the property with the hopes of transforming it into the 2016 Olympic Village (Chicago was on the short list at the time, but ultimately lost to Rio de Janeiro). After this, the site was pitched as the Barack Obama Presidential Library, but lost a second time to a competing idea: the library will now be in Jackson Park, adjacent to University of Chicago’s campus.

After the two failed attempts to develop the land, the city of Chicago started looking for help. The site went out on request for proposal, allowing private developers to compete by putting forward plans of their own.

Local developers and capital partners formed GRIT Chicago (Global Research Innovation Technology). They saw the abandoned acres as an opportunity — and won the city’s support. In 2017, the city awarded them the site for their “Bronzeville Lakefront,” a mixed-use health innovation district, a nod to the historic hospital.

The Bronzeville Lakefront, a $7 billion mega development, is set to reintroduce the neighborhood into the fabric of downtown Chicago. According to the development’s website, GRIT hopes to “catalyze Bronzeville’s economy, infrastructure, and workforce, creating generational opportunity.” More specifically, developers say the project will create a total of 75,000 direct and indirect jobs and $8.2 billion in economic growth.

GRIT and residents alike are hoping the project will not add Bronzeville to the growing list of Chicago neighborhoods experiencing gentrification and increasing housing prices due to new developments. For example, the zip code that’s home to Pilsen, a community primarily made up of Latino residents, experienced a median household income increase (MHI) of 43% over 2011-2020, the same time frame within which the 606 Trail was started and completed. Concurrently, the zip code saw its Latino population decrease by 17% while its white population increased by 28%.

“I hope Bronzeville grows and is still treated as a place of cultural significance.” TikTok Historian and Auburn Gresham native Shermann “Dilla” Thomas, whose short videos on Chicago history has won him over 94,000 followers and a million likes, said. “You know, I just hope that the people who have been responsible for at least 120 years of Bronzeville’s greatest are not left out. [I hope] they have a seat at the table.”

Dubbed the “Black Metropolis,” Bronzeville was once the center of African American culture and business from 1920 through the 1950s. While the neighborhood may not be as well known as others in Chicago, its residents are: Bronzeville boasts a long list of historic locals, such as Gwendolyn Brooks, Richard Wright and Louis Armstrong.

“It’s indicative of a city inside of a city,” Thomas said about Bronzeville’s nickname. “It’s called the Black Metropolis because it had to become its own sustaining city because of how the members of the community were discriminated against when they left Bronzeville.”

According to Thomas, businesses started opening up in Bronzeville during the early 20th century because of discriminatory practices in downtown Chicago’s establishments.

Further, racially restrictive covenants allowed neighborhoods to discriminate against who they allowed to buy and rent. According to Thomas, around 80% of Chicago had restrictive covenants that barred Black residents from living in certain places from 1900-1948. Bronzeville, which had no restrictive laws, became a safe haven for Black Chicagoans.

It was this close proximity that made Bronzeville such a cultural hub.

“Because they can’t live anywhere else they live amongst each other, but then that closeness [to each other] is the reason why [Bronzeville] becomes so great,” Thomas said. “If all of the black jazz musicians have to live in the same two mile area, then it stands to reason that all of the jazz music that comes from this place is gonna be magnificent, because you don’t gotta walk but a block or two to get the best backup percussionist ever.”

Bronzeville did not just excel in music. African-American publications like the Chicago Defender and Ebony and Jet magazines were born within the neighborhood. Overton Hygienic, the company that brought cosmetics specifically for women of color to the market, was based in Bronzeville.

Today, Bronzeville is home to 42,696 residents. According to a report done by the Brookings Institution, in 2018 43% of those residents lived in low-income households earning under $25,000 annually. Major employers are primarily those within the public sector, like the Chicago Police Department, Chicago Public Schools and social service providers.

Bronzeville’s historic inclusivity and community support remains an integral part of its identity. For example, Boxville Marketplace is a web of stores located in reused shipping containers. The network provides a low-cost alternative to the typical brick-and-mortar space for local businesses.

The Bronzeville Lakefront development team is aware of the neighborhood’s historic past, and says they are developing with that in mind. GRIT Principal Regina Stilp, who is leading the development and design side of the project, hopes to be “on the right side of history.”

But what is the future of Bronzeville? According to GRIT, spaces that succeed in life science, health equity and regenerative design are places that succeed overall. Thus, their proposed development is equipped with “living buildings,” ditching natural gasses for geothermal systems.

In addition to being a “hub for innovation and wellness,” the development will be a commerce center. Within the project, the team has pledged to achieve a 30% diversity target for Minority Business Enterprises (MBE) and a 10% target for Women’s Business Enterprises (WBE). They also have a Bronzeville-specific commitment: 10% of the retail space is reserved for local businesses at 20% below market rate, according to their website. The team has also reserved 20% of its residential units for affordable housing.

This is not the first time Stilp has worked on a neighborhood revitalization project. Over her 20 years at Chicago real estate firm Sterling Bay, she helmed some of their most influential projects. Stilp was a key player in transforming the slew of obsolete factories into the trendy tech-hub Fulton Market is today. As Sterling Bay’s director of design, she helped McDonald’s and Google find their industrial-chic, exposed-brick homes for their Midwestern headquarters.

One of the reasons why Stilp believes her past projects were such successes is their commitment to the unique character of each neighborhood. When Google decided to open their headquarters in Chicago’s former meatpacking district, the goal wasn’t to extend the Loop’s skyline, but rather lean into the area’s history.

Stilp and her team are faced with a sort of development Catch-22. On one hand, people might be worried that new construction will dull the charm of the neighborhood they know and love. But the alternative is also complicated — that the site goes unused, the buildings fall into disrepair and the neighborhoods stall economically. Stilp and her team are trying to work around this sort of zugzwang.

“So we have this responsibility of being landed in a neighborhood. Chicago is a city of neighborhoods, so you have to develop like a neighbor, not like a developer,” Stilp said.

GRIT is planning to blend the development with the Bronzeville community in a few different ways. They are seeking out local restaurants and retail in the hope of getting them to open in the center. They are also working with Chicago Neighborhood Initiatives (CNI), an organization that helps to generate jobs for underserved urban neighborhoods and “sustaining long-term community partnerships,” according to their website. Another one of GRIT’s players is the Bronzeville Community Development Partnership, an organization that helps to implement sustainable economic development strategies in the Bronzeville neighborhoods.

“In all the neighborhoods in Chicago, … people are there for a reason, and you don’t want to scrub that reason out,” Stilp said.

Nonetheless, Thomas cautions that there are some elements of a neighborhood that can’t be replaced once gone.

“We’re so big on knocking something down, and then putting a sign there that says this thing was here,” Thomas said. “You know, I believe places have energy. To go visit a [historic] church versus going to visit the site to where that church was — it’s two totally different things. And I think if we’re not careful, we’ll allow developers to erase the history of Bronzeville in the name of short term profits. And neighborhoods will be affected long term.”

Stilp says GRIT is aware and appreciative of the neighborhood’s past and explained that the development is there to underscore Bronzeville’s culture.

“We’re not there to save [Bronzeville]; it’s already a very vibrant community,” Stilp said. “We’re there to amplify what’s there — to be a reflection of what is good in Chicago.”

Chicago’s McCormick Place convention center — the largest one in North America — is often viewed as a bookend to the city’s downtown area. But right past it sits Bronzeville, small but with granite-like pride and history. The Lakefront’s goal, according to GRIT, is about intra-city connection, bringing a neighborhood that has contributed so much to its rightful space in the Chicago skyline.

“I always say it’s like Chicago has turned its back on this part of the city by putting McCormick Place there. And really there’s this gap in there into a very vibrant and amazing part of Chicago,” Stilp said. “I feel like there’s this missing piece to the connectivity, and I really think that it will be a great destination.”